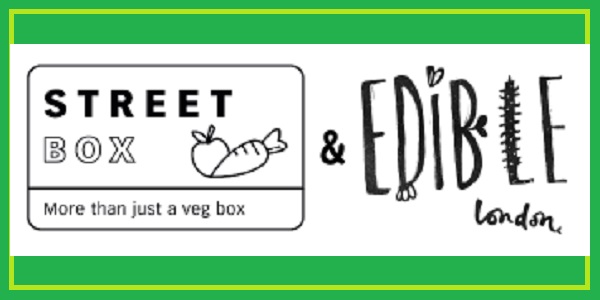 A LARGE INJECTION of fresh fruit and veg is going into the charitable food donation sector, thanks to co-operation between two organisations which both try to redefine how we look at and deal with food resources.

StreetBox is the work of a traditional greengrocer with strong community connections in North London. It rescues surplus fruit and veg and distributes it to those in need – tacking the overconsumption of plastic along the way. For each box of fruit and veg that is sold, a similar box is donated to a charitable cause.

Edible London works to help those in food poverty to access the kind of food that will improve their diet nutritionally – and to support sustainable food production. Its food box donations to those in need are the basis of around 50,000 meals a week.

The partnership between the two will see StreetBox donate an initial 500 boxes of surplus fruit and veg to Edible London, after which the two will continue to work together to help each other reach their shared goals of tackling food poverty. As the partners put it, they are “Redefining Surplus, Tacking Food Waste, and Nurturing Communities. Together!”

You have to praise the two organisations for diving in and meeting need – but you also have to stop for a moment and question what is going on. The Government has signed up to ambitious environmental targets – but has done little, if anything, practical to rein in a food industry that aims to maximise profit by squeezing the quality of its products.

Should affordable and nutritious food be a right, rather than a rationed commodity? If there are people too poor to buy nutritious and high quality food, there’s a government sat by content that wages (and benefits) are too low. (That’s probably because other employers are driving down their labour costs.)

There can be no criticism of people and organisations that have helped solve the practical problem of hunger during the Corona Crisis.  There is an argument, however, which says that in the longer term an expansion in the food charity sector will let the Government off the hook. Why should the Government act, if a charity sector provides a safety net?

If the economy does continue to nose-dive, there may not be enough tax-paying workers with disposable income to buy fruit and veg boxes and fund the give-aways.  That hints at the fallibility of the charitable approach – and could be our next big problem.

In the meantime, well done to these two organisations which are at least putting some thought into how to deal with capitalism’s excesses.

•For more information about Edible London, go to:
https://www.ediblelondon.org