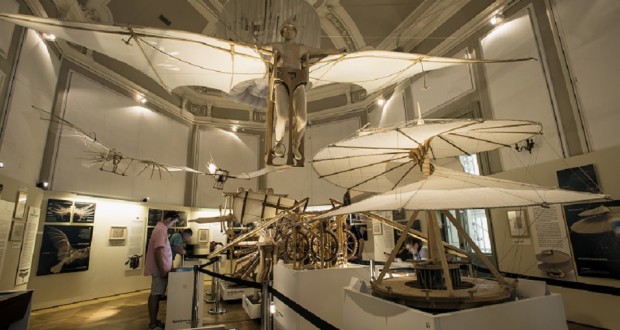 The World of Leonardo – the Ultimate Da Vinci Experience

Now all one needs to gain access to the vast genius of Leonardo da Vinci is modern technology. The Italian genius’s hidden secrets are now accessible to each and every one of us through the mere click of a finger.

The renowned legend of the Renaissance is in full flow as Leonardo3 ― The World of Leonardo delves deep into the world of da Vinci. While embracing the use of modern technology, the exhibition in Milan re-lives da Vinci’s awe inspiring machines using amazing reconstructions which take visitors on a mesmerising futuristic journey using interactive experiences.

The World of Leonardo is an incredible exhibition featuring world premieres and discoveries resulting from unprecedented studies on the work of da Vinci. There is more: scale models of Leonardo’s inventions and machines with state-of-the-art touch screens enable visitors to “turn the pages” of Leonardo’s personal notebooks (Codex Atlanticus, Codex on Flight and Manuscript B), as well as showing the master’s artworks pre- and post-restoration (Mona Lisa and The Last Supper). 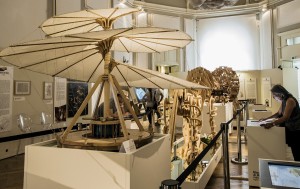 Highlights of the new exhibit include the Great Kite, which is considered his definitive flying machine; the world’s first working prototype of his Self-Propelled Cart; the first physical models of his Mechanical Bat and Mechanical Lion; and the only playing model of the Harpsichord-Viola among. All of the models in the exhibit are premieres not present in other exhibitions or the correct interpretations of what as been made wrong by others.

The exhibition is fully interactive thanks to avant-garde, touch screen technologies based on three dimensional, high-definition graphics and animations.

The incredible and intriguing designs for these machines are all collected in the Codex Atlanticus, the largest and most precious codex of all. Now, for the first time in history, the Codex Atlanticus is accessible to the general public. Through the technology of high resolution digital photography, it is now possible to present the pages of the Codex on interactive stations, giving visitors the opportunity to discover Leonardo’s machines for themselves.

Leonardo3 is now established as a world market leader in exclusive exhibitions and publications on the grand genius of da Vinci. Exhibitions are the result of extensive and thorough investigation by a rigorous research team which investigates and develops never-seen-before machines.

The exhibits are “dynamic” rather than “static” and there is extensive use of 3D animations, physical models and interactive software to offer the public a unique level of interaction and a hands-on “edutainment” experience.

I was able to experience for myself a digital restoration of the Last Supper, the reconstruction of his Crossbow, his Time Machine and his concept of the Ideal City. The electronic reconstructions were simply brilliant and like a schoolboy I spent a large amount of time examining this feature of the exhibition.

There is no doubt that globally Leonardo da Vinci is hailed as a genius of the highest order. Da Vinci is a golden example of an artist and scientist combined to flourish and be celebrated during a period of great enlightenment. It is precisely for this very reason that within one physical body a formidable scientific brain and master artist blossomed and thrived, hence Da Vinci’s outstanding works of inventions are also acknowledged to be works of art.

For more information, go to: www.leonardo3.net