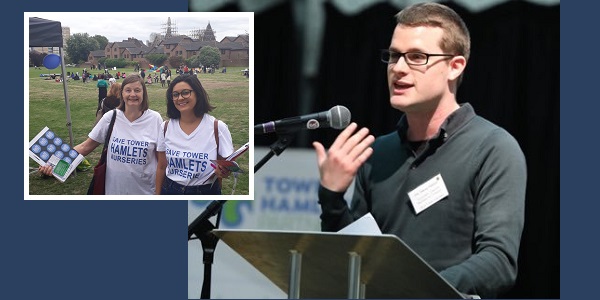 A couple of summers ago, the crowds queued up in Bartlett Park to sign a petition to keep Tower Hamlets Council nurseries open. Sadly, Cllr Hassell turned their request down.

“Spent this evening on a socially distanced walk with fellow cllrs around Upper North Street, Bartlett Park and Bow Common Lane to discuss what could be done to improve public realm and make the roads safer for all.”

Some Tower Hamlets residents have argued that the best way to keep services safer is to keep councillors well away from them. What a cynical lot they are. Perhaps they were thinking of Danny Hassell’s involvement in Labour’s successful campaign to keep the Council’s day care nurseries open in 2014. Or perhaps they were thinking of his more recent campaign, when he was successful in closing them.  Who knows?

Having taken Tower Hamlets staff from their jobs already, does Cllr Hassell want to see more staff lose out? Or does he want to turn the tide, and support the workforce against the imposition of new “Tower Rewards” contracts? Why not ask him?