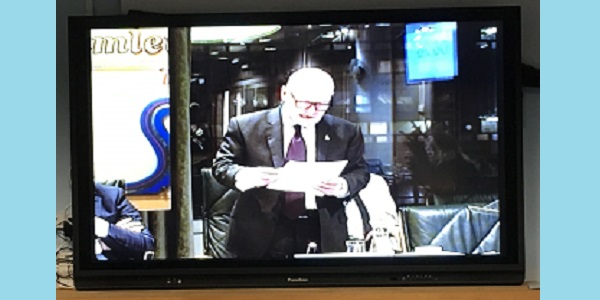 John Biggs reads out his Budget speech. (As the Council press officer barred our correspondent from the press table, we can only bring you a photo of the dispay at the back of the public gallery.

IT WAS business as usual down on the Tower Hamlets Council meeting on Wednesday, 19th February as the ruling Labour Group managed to force its budget through.

As the agenda item began, Executive Mayor John Biggs introduced his Budget to the Council and to those left in the public gallery. (Many members of the public had come to support the public petition against closure of the Community Language Service [CLS] and left after it had been dealt with, leaving rows of empty seats.)

The Mayor was hardly inspiring. He read out a speech which explained that the Government was bad and was making cuts in funding to local government with which he disagreed. He claimed that the Council was doing its best to support vulnerable residents. He referred to the results of a public consultation on the budget, claiming that he had taken public views into account.

(Ironically, more people signed the petitions against closure of the CLS than responded to the budget consultation – but he chose not to take account of their views and defended his own decision to close the service, which had been operating in Tower Hamlets for over 30 years.)

Cllr Candida Ronald, Cabinet Member for Resources, formally seconded the Mayor’s Budget. (Cabinet Members are paid a Special responsibility Allowance of £20,000 on the understanding that they will spend three days a week carrying out the duties of their portfolio – so she must have known something about it.)

Cllr Peter Golds introduced the Conservative amendment to the Budget. He congratulated the Tower Hamlets Mayor for the process which had drawn up the Budget – but he did have various amendments. In connection with these, he pointed out that the Tories had won the last General Election – implying this gave them a greater authority than Executive Mayor John Biggs when it came to assessing the needs of the good burghers of Tower Hamlets.

Cllr Rabina Khan – elected as an Independent but now sitting as a Lib-Dem Councillor – then moved her own amendment. She particularly opposed the Mayor’s decision to raise the Council Tax by 3.99% – the highest raise permitted by central Government. She recalled a number of pre-election promises made by the Executive Mayor and Labour Councillors which, she stated, had been broken once the politician(s) making them had been elected. 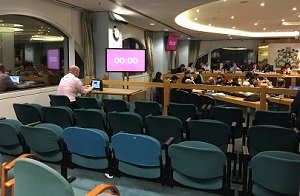 After these introductions, the Speaker opened a general debate on the Budget – warning councillors that they could only speak once during the debate. She confessed that she already had a list of those who wanted to speak, and she would work her way through it. This met with another gale of giggles from the Chamber. As all opposition councillors had already spoken, in practice the Councillors speaking in the debate would all be Labour Councillors speaking in support of it – so whether the Speaker took Councillors who put their hands up or on a pre-arranged list was rather academic.

The Speaker proceeded to call Councillors to speak – warning the next Councillor on her list to stand by as she worked her way through the names. This is a useful practice at large meetings, when you want the next speaker to come to the podium, but it’s rather odd in a Council Chamber where all councillors speak from their allotted seats. A series of Labour Councillors then rose and read out speeches which either criticised the Tory Government or praised the Labour Executive Mayor – or, sometimes, both. Who were they talking to? Surely not to each other?

Cllr Marc Francis was called during the debate, raising some hope that there might be some constructive criticism of the Executive Mayor. Constructive criticism there was: but it was targeted at the Tory Government, and Cllr Francis went on to urge Cllr Golds to press the case of Tower Hamlets with Comrade Boris and anyone else who would listen. Only at the end of his speech did Cllr Francis ask for the proposed cut to the Riverside Centre to be closely scrutinised.

Cllr Kyrsten Perry criticised the Tory Government for fundings cuts – and, for good measure, for taking over, from the Council, the planning application from the developers of the site formerly occupied by the Westferry Printers.

After this staggered chorus of Labour speeches, a vote was taken. The Budget amendments from the Tory Group and Cllr Khan were lost 41-2 and 40-3 respectively. The substantive Budget was then passed by 39 votes to 3, with one abstention – confirming a number of cuts in Council services which the poorer residents of the Borough will pay for.

The meeting closed at 9.40pm – but it had been dead for at least an hour by then already.