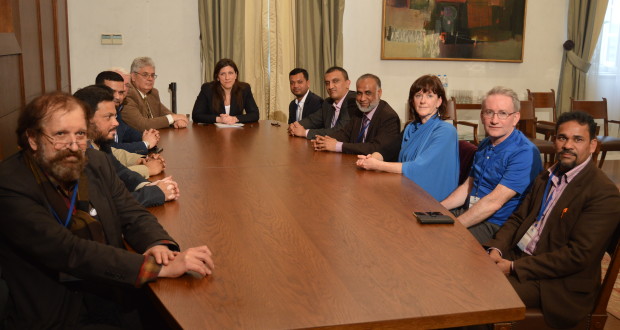 The delegation with Ms Konstantapoulo

Mayor Lutfur Rahman has always said that his Administration in Tower Hamlets is an anti-austerity Administration. And Deputy Mayor Cllr Oliur Rahman is helping Mayor Rahman show this is not just a paper policy – by leading a delegation of Tower Hamlets First Councillors and trade unionists to Athens, to meet the new President (Speaker) of the Greek Parliament.

Deputy Mayor Oliur Rahman said: “People across the world have been inspired by the Greeks’ resistance to forced austerity and their vote for an alternative, and we can take practical lessons from this while providing valuable support to Greece. It was a privilege to discuss these issues with the President of Parliament. Many of those who feel failed by mainstream politicians are looking to Greece, and it is brilliant that we have the chance to build bridges between communities across Europe.”

The Tower Hamlets delegation – led by Deputy Mayor Oliur Rahman and including Tower Hamlets First councillors and local trade unionists – was received by Zoi Konstantapoulo, President of the Greek Parliament, on Sunday.

The two sides discussed Europe-wide co-operation in the anti-austerity movement. Co-operation and solidarity are key to success in finding alternatives to austerity, as the people of Greece have discovered. Although thousands of people there opposed individual measures brought in by the previous Government, it was only when they organised together and ensured there was an anti-austerity party to vote for in the General Election that they were able to election a Government which would set about finding an alternative.

In the UK, no other Council has been as explicit over its willingness to oppose austerity as Mayor Rahman’s Administration. A few Labour Councils, notably Islington, have made it clear where they stand – but most other Labour Councils have tended to make statements that they regret austerity, while then going on to implement cuts and saying they don’t know what else to do. As the UK heads towards an election, we wait to see whether electors will elect an austerity Labour Government rather than a Tory one – with little credible anti-austerity party on offer.

They went on to visit Vyronas, a deprived suburb in the east of Athens, where they met the local mayor, the first left-winger elected in years. It also visited two “solidarity centres”, which are part of a Greece-wide network that provides clinics, food, advice and education for those hit by the economic crisis.

The delegation also held a meeting with KEERFA, an anti-racist and anti-fascist movement which included members of the small but significant Bangladeshi community living in Athens. They also met various campaigners including a migrant strawberry picker who was one of hundreds shot at by their manager after having demanded that their wages be paid up to date.

A motion on Greek solidarity and building connections with Athens will be brought to the next meeting of Tower Hamlets Council. In recent months, Labour Councillors, who form the largest group on the Council, have used procedural measures to stop resolutions tabled by Tower Hamlets First Councillors being debated: it remains to be seen whether they will allow councillors to debate solidarity with Greece.

Local trade unions including Tower Hamlets Unison and Unite Community will be developing their work with the Greek movement. John McLoughlin, Branch Secretary of Tower Hamlets Unison, said: “We witnessed both the suffering imposed by austerity measures on the Greek people and the social solidarity that has propelled Syriza into government. We were struck by the warmth and generosity we encountered, in welcoming us and supporting each other. The Greek people are in the frontline of a Europe-wide dilemma where the needs of ordinary people are being sacrificed to pay debts and deficits they did not create and cannot pay. We remain committed to building solidarity and fighting for an alternative.”