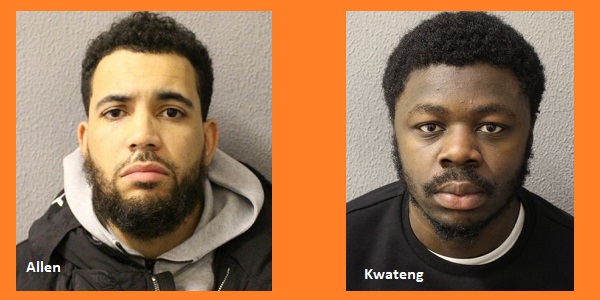 A MASSIVE POLICE investigation – Operation Halmist – has secured the conviction of two more men who had been running drugs out of London on the County Lines system.

The two were found guilty, after an eight week trial at Blackfriars Crown Court which ended on 30th July, of conspiracy to supply class A drugs via a county lines network. They join four more men who had earlier pleaded guilty to the same offence. All six will return to Court on 9th September for sentencing.

The active part of the Operation came to an end on 12th December 2017, when 15 warrants were executed in the early hours of the morning – leading to £25,000 in cash and around half a kilo of heroin being found and 15 people being arrested. Other evidence collected including phones and laptops, as well as cars and designer clothing.

The Court heard that the Operation had established that Asfa Allen had been the organiser of at least four county lines taking drugs out of London to the surrounding counties. His operation was run by a gang of subordinates, recruited from East London.

Detective Inspector Dave Williams, from Specialist Crime North said: “Drug dealing is inextricably linked to the violence we have seen across the capital. This result is a culmination of months of hard work and dedication focussed on tackling these prolific drug dealers who would targeted vulnerable people and managed multiple drug lines for the sole purpose of financial gain.

“Allen, who also went by the stage name ‘ASCO’, had landed a successful and lucrative recording contract with a major label where he could have left his life of crime and violence behind, however he could not release his grip on running a county lines route and will now be spending time behind bars instead of working on his music.

“I hope today’s conviction reassures communities that we do take action and highlights our ongoing commitment to bearing down on county lines criminality.”

2019-08-01
admin1
Previous: Sri Lanka exuberant after ODI clean sweep
Next: Did you see A13 motorbike accident?