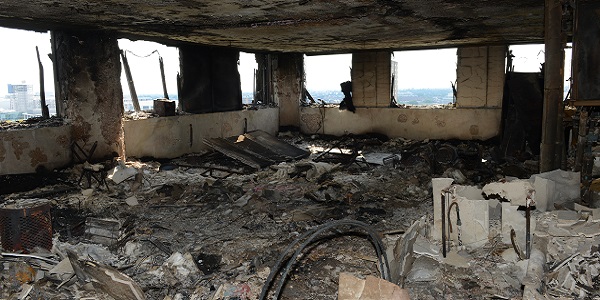 We must never forget the horror of Grenfell.

ARE THERE dangers in yet another widely used type of exterior cladding? Two years on from the Grenfell fire, safety inspectors have been looking at the potential dangers of High Pressure Laminate (HPL) cladding.

The Grenfell fire shocked the world – not only because of the horrendous experience it was for those who died and for survivors, but also because the scale of the incident was almost certainly caused by building materials which were supposed to have been safe.

National and local authorities managed to act fairy quickly, inspecting stock to look for other buildings with ACM cladding similar to that used on Grenfell. Replacement has taken rather longer – but at least in most cases it is underway.

Now, however, BBC5 Live has discovered that a different type of cladding, known as HPL cladding, may be dangerous too. This cladding has been used on residential tower blocks, but also public buildings such as schools, hospitals and nursing homes.

The BBC reports that there are two worrying signs that HPL could be a problem.
•A research group, the Building Research Establishment, has tested a range of cladding systems: the results are not known, but the group has said that none of the systems that did pass the BS Standard 8414 tests was based on HPL.
•The Journal of Hazardous Materials has tested HPL and found that it releases heat 25 times faster than non-combustible products – and the amount of heat the substance releases is a staggering 115 times more than non-combustible products.
These findings have encouraged the Government to ask fire safety experts to include HPL in the new tests.

Everything to do with Grenfell seems to be happening at a slow pace not at all in keeping with the scale of the fire and the horror it inspired. It took until last December for the Government to introduce new fire safety regulations. This led to government safety tests on a range of building materials, which began a month ago.

A spokesperson for Tower Hamlets Federation of Tenants and Residents Associations said, “This is very worrying news for Tower Hamlets, with our many towers. There seems little doubt that HPL is under the spotlight, but we have to do more than hope that the authorities get round to looking for it in our Borough and taking urgent safety action. We shall be asking the Council what action they are taking to keep us all safe from what may be a new threat.”