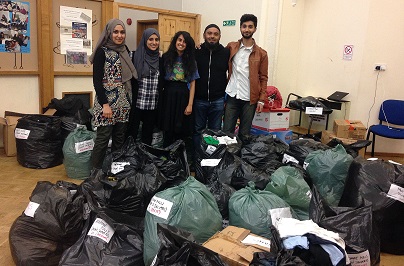 Convoy to Calais is a grassroots project which was initially intended to just be a group of friends fundraising and distributing clothes. However, after witnessing the malicious scapegoating of refugees and realising how this sort of attitude is increasingly being taken as normal, a local university student has decided to take it all a step further.

Mayisha Begum is a final year Psychology student at Queen Mary, University of London. As part of her 21st birthday celebrations, Mayisha and a group of friends got together to try to raise clothes for refugees at Calais.

“It was a small, private affair and it just snowballed – and now it has become quite a big event,” said Mayisha. “We have had so many donations. I request our kind donors to stick to sleeping bags, tents, blankets, men’s clothes and coats, trainers, hiking boots, wellies, hats, gloves and scarves. We are quite meticulous about items in order to avoid wastage, and unfortunately we have had to remove quite a lot of items such as women’s clothes, ceramics, perishable foods and sanitary products.

“This all began because of the refugees being scapegoated. It is now the norm to blame refugees. We want to change this attitude to one of compassion.”

Sister Christine Frost kindly made facilities at St Matthias Community Centre, and the group held a collection day. A steady stream of donations trickled in, with a very amiable group of volunteers greeting visitors, accepting bags and sorting all the items.

Mayisha is disappointed with the response to the international crisis. “It’s been an absolutely disgusting response from our own governments, so we decided that this shouldn’t just be about collecting supplies but actually educating people about the reality of the situation, reminding people of their humanity, and encouraging love and compassion rather than hatred and intolerance.”

Mayisha added: “Scapegoating and negative targeting has become the norm, and through holding events like this in as many places as possible – and with as many communities as possible – we can make empathy and understanding the norm.”

Mayisha and the Convoy to Calais group have several community events planned. “We want to still be supporting these vulnerable people when the hype has died out and the media glare is elsewhere,” she said. “I hope the community will join with us and help achieve change for the better.”