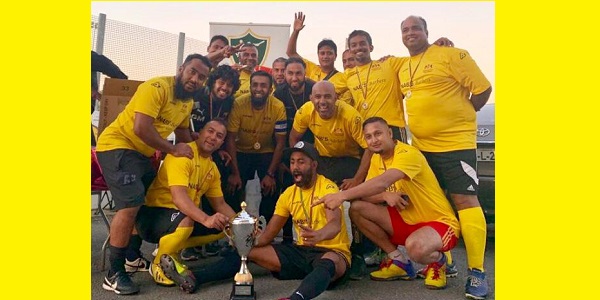 AFTER THEY LIFTED the Sonali Otith Masters Vets Trophy for the second time, Weavers FC received an unexpected invitation from the city of Limerick, in Ireland’s County Limerick.

The city, which is populated by approximately 190,000, invited Weavers to participate in sporting competitions arranged by the BSAI Sporting Club, which is bsaed among the small, progressive, Irish-Bangladeshi community.

The invitation – to form a partnership between London and Limerick – was warmly accepted and kickstarted inaugural football and badminton sporting events, promoting the city, diversity and sports in the community.

The city boasts one of Europe’s better preserved castles, the King John’s, (with the King being the brother of Richard the Lionheart) and can count the late Sir Terry Wogan as one of their own.

The footballing event was opened by Mr Monirul Islam and Limerick city’s first ever councillor of Bangladeshi background, Mr Kalam Azad Talukdar. They welcomed the London vets footballing team, with an average age of 40 years, to the city. The host team was made up of talented Limerick Irish-Bengal stars, averaging a sprightly 23 years.

A “grianmhar” (Gaelic for “sunny”) afternoon saw a quick start by the London vets team, with the lead lasting only ten minutes after the energetic Limerick side levelled on a sharp counter attack. Weavers adjusted to the surroundings through intricate passing, skills, and displaying control in the second half – winning two goals late in the game to secure victory and further silverware to their recent accolades.

The badminton event was a battle between the Limerick Irish-Bengal Badminton Stars and Weavers Badminton Club, in an open age affair – with the Limerick side including rising Irish national level talent Syed Azhar. The contest was emphatically decided on the last game, which Limerick won 3-2 through class, finesse and guile – beating a Weavers side that showed power, skill and grit.
The overall football-badminton sporting events settled at 1-1, a befitting end to the visit.

BSAI Chair, Mr Monir Islam, said, “It has been a joyous occasion and we are grateful for Weavers football and badminton teams accepting our invitation. It has helped increase the awareness of our city, sports and community. We congratulate both Limerick and Weavers clubs and hope to continue this new partnership between Limerick and London.”

Weavers Club Chair Mohamed Atikur Rahman thanked BSAI Limerick for the invitation, their hospitality and for organising a thoroughly enjoyable event. He added, “We have enjoyed our time and wish to extend the invitation for the BSAI to come to London in the future.”