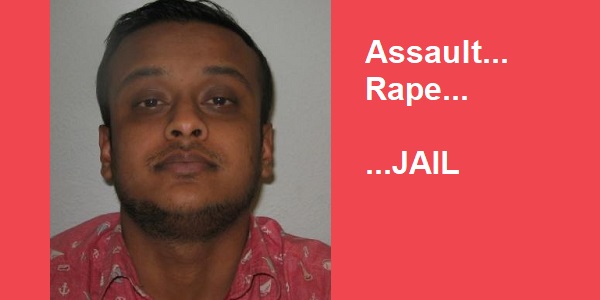 Mohammed Ashfak: guilty of eleven offences and given a long jail sentence

A WOMAN who survived four months of physical abuse and mental torture at the hands of her partner – and who bravely reported his behaviour to police – has now had the comfort of seeing him jailed for 19 years.

Mohammed Ashfak, 31, of Upton Park, Newham, was found guilty of 11 offences against his partner. He appeared at Snaresbrook Crown Court last month and was sentenced to this extensive jail term. He will also spend four years on licence when he is eventually released from jail.

Ashfak assaulted his victim several times between January and May 2020. On two occasions he raped her – filming the assault as he committed it.  When his partner reported one of the assaults to police, Ashfak assaulted and threatened her and forced her to withdraw the allegations. At other times he threatened to kill her.

The Court heard a statement provided by Ashfak’s victim, where she described how he had terrified her and the effect this had, and still has, on her life. Several times she felt too scared to come to Court and give evidence, but the thought that Ashfak could assault another women gave her the courage to speak out.

The woman’s story raises disturbing questions about how the judicial system treats reports of domestic violence. The women reported Ashfak to the police in April 2020, explaining that he had assaulted her and then tried to rape her at knifepoint.  He was charged with two offences and appeared in Court – where he was granted bail. Who in the Court thought that was a good idea? The inevitable happened. He returned home and imprisoned his victim in the bouse. Within a month, his victim was found in the road, covered in blood.

On that occasion, the victim gave police a full account of Ashfak’s violent behaviour. At that point, trained police officers provided specialist support until the case came to Court.

Detective Constable Jennifer Newman, who led the investigation, said, “Ashfak is a dangerous and manipulative man and I have no doubt that were he not serving a custodial sentence, he would go on to commit similar offences against other women. […]

“She deserves a huge amount of credit, not only for reporting Ashfak to police, despite his threats about what would happen if she did so, but also for supporting the trial and providing key evidence which led to his conviction. […] It is because of her bravery that he is behind bars and we hope her actions encourage anyone else in an abusive relationship to come forward and speak to us. We will support you every step of the way.”

In 2021, the Metropolitan Police published a new strategy for tackling violence against women and girls, which aims to support women who report this type of crime and plans to arrest more perpetrators.

●Read more about it:
East London men jailed for sexual abuse of a teen
Barking father and son guilty of “barbaric” murder