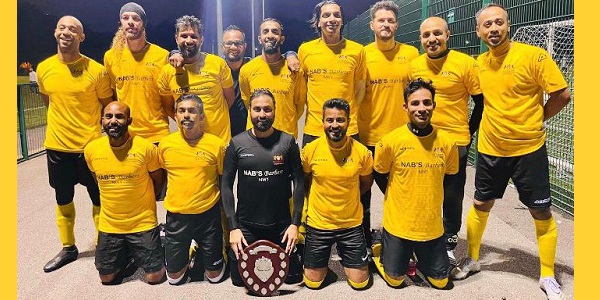 WHITECHAPEL-BASED Weavers FC have been crowned Vets Champions of the Thursday Vets League (TVL) 15 Premier Division 2021 after battling the title decider with rivals Beaumont FC in a high-octane finale for the summit.

The pitch was bustling with fans from both sides and neutrals taking up their positions to watch this scintillating spectacle. The teams did not disappoint the large crowd in attendance, with the score ending 2-2.

The TVL is a league which has seen its popularity rise, with stars such as Joe Cole, one of England and Chelsea FC’s finest, turning up for London Legends in recent times.

Coming into the game, Beaumont were trailing by a point, knowing a win was all it would take to leapfrog their opponents. Player-Manager Russell Rahman (Russ) switched formation, anticipating Beaumont pressing higher. Weavers adapted quickly to the tactic, countering swiftly from defence and unleashing speedy Ian Lopes, breaking away on the left. With the opposition pressing high, Sam Boujettif received the ball and fed Arshadur Rahman (Ash) to finish the move with devastating impact in the opening minutes, beating the sensational Helal Uzzaman.

Beaumont responded quickly with a succession of interceptions, seeing the livewire Spiro being twice blocked by the twin towers, Shuhel Ullah and Kwesi Scantelbury. With Ash replaced by Paulo Da Graca early on because of a muscle injury, Weavers continued making use of the right midfield, exploring gaps resourcefully. Abdul Monaf, linking with Paulo and Sam, soon found Lopes again, who came close to increasing the gap – only to be blocked by Helal, spreading wide to deny the Weavers talisman.

The second half begun at the same speed as the first, with Spiro guiding a header to equalise emphatically from a whipped cross. The teams were level at 1-1. With the intensity of the game continuing, Lopes and Da Graca broke away on the right, exchanging a sequence of passes before Lopes slotted clinically to take the lead back at 2-1. Beaumont put on fresh legs, with a flurry of crosses torpedoed into the Weavers defence. The commanding Russ offered his backline with vital communication and Ruhul Alam, Abdul Monaf and Kwesi responded resolutely to the aerial and ground assault from the evergreen Mufi Uddin and Siam Uddin (Tipu), joining Spiro.

The end to end continued, with Da Graca coming close in the Beaumont end, while Javier Rivera’s (Javi) effort was blocked by Ruhul, with the ball spinning agonisingly wide of the Weavers post. With minutes remaining, the referee made the brave call to award a contentious penalty for a barge. Weavers fans howled in disagreement. Spiro picked himself up and dispatched the impending penalty with conviction to level again. Soon after Lopes’s cross-field pass found the advancing Ruhul, who combined with midfield maestro Khalid Ahmed to get a shot off – entertaining the crowd with trickery in the build-up and reducing the stoppage time that seemed to last a lifetime for the Weavers fans.

Weavers capped off an incredible title run as deserved champions with the curtain closing at 2-2 and fans exuberant in celebration. It had been a season fuelled by character and resilience showcased by earning valuable points from scoring with last touches in games on two occasions – against London Apsa and dispatching a decisive penalty at London Legends.

The Weavers Co-Chairs Atiqur Rahman and Nanu offered a joint statement. “This title is a gift to the hard work, effort and dedication from our playing staff to the management,” they said. “The togetherness can be seen in the way we played the game – passing, moving and helping each other. We thank Beaumont for an incredible challenge and thank people for the many wishes shared by fellow competitors, friends and neutrals.”