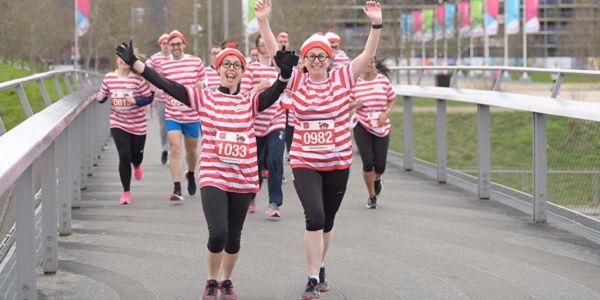 A FANTASTIC COLLECTION of runners participated in the 2020 “Where’s Wally?” fun run held in the Queen Elizabeth Olympic Park on Sunday, 15th March. 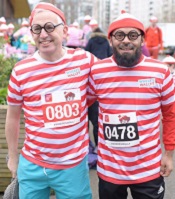 Given the threat of the Corona Virus, runners were also given the opportunity to participate in virtual runs and share their successes online using the #MyWallyRun hashtag. However, nothing beats a lively community event, and the hundreds of runners in the Queen Elizabeth Olympic Park raised awareness of the valuable efforts of the National Literacy Trust to promote literacy.

Research by the National Literacy Trust shows that children born in communities with the most serious literacy problems have some of the lowest life expectancies in England. They start school behind their peers and are held back at every stage in their lives. They are twice as likely to be unemployed and three times more likely to have mental health problems as adults. The support of the Where’s Wally? runners will boost endeavours to close this literacy gap and help change lives.

Runner Zoe said, “It was a fantastic day with a great atmosphere and a range of ages. We’ll definitely do it again. A Wally forever!”

Shafaq, mother of six year old Mustafa, added, “We really enjoyed the run. We love looking for fun runs we can do together, and it’s been so fun dressing up as Wally! It’s such a great race, especially for kids. Mustafa is excited to add his new ‘Where’s Wally to his collection!”

Stuart said, “Great to be out and about celebrating literacy and running. I ran with Sam and Lisa who came all the way from LA for today!”

Spectators cheered from all around the course. During the day there was family entertainment, as well as food at the Timber Lodge Cafe.

“Extraordinarily, here in the UK one in six adults has a literacy problem, and there are large parts of the country affected by ongoing literacy challenges. Literacy is crucial to everything. It helps people into jobs and to access things like healthcare. Literacy is an equality issue.

“Where’s Wally? is one of the world’s favourite books and we’re turning it on its head today. Rather than have one Wally in a crowd, we have a huge collection of them. And because of the current health situation in the UK and with some runners deciding to not come along today, we’ll have across the nation in the next few days people dressing up as Wally and running for literacy. It’s a fantastic way of celebrating the power of books.

“I have to admit I’m not an athlete. When I was aged 14 at school I had an in growing toenail and I didn’t have to do any sport. I did no exercise until just under a decade ago, when our charity lost all its funding and we realised we would have to fundraise. And I – for the first time, at the age of 40 – took to the parks, and now I love running. I do a 5 or 10k run a few days a week before work, and now it’s an important part of my life.

We started off at Victoria Park, and now we’ve come home to the Olympic Park. Thank you all for coming out and showing your stripes for literacy.”

By taking part in this event, runners and donors are helping to transform the life stories of children in some of the most deprived communities across the UK. Every penny raised in sponsorship helps give disadvantaged children the literacy skills they need to succeed.

•For more information, go to:
www.literacytrust.org.uk