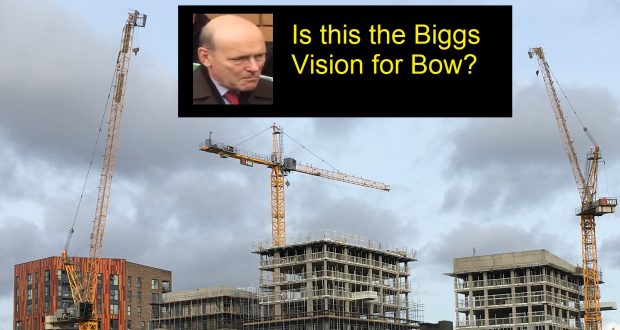 PUBLIC CONCERN is growing over the plans to develop the former gas works site on Bow Common Lane. These are due to be considered by the Tower Hamlets Council’s Strategic Development Committee (SDC) this week.

The planning application was considered by the SDC on 2nd December, with the Committee being asked to give outline approval to the scheme as a whole and detailed planning permission for its first phase. At that meeting, councillors asked the developer and Council officers to review the provision of family housing in the scheme.  The officers’ report tabled for the SDC on Tuesday, 19th January have introduced some additional planning conditions: it seems the mix will be addressed as future phases of the development come back to the Committee.

There SDC meeting on 2nd December also dealt with objections to the planning application which came from Tower Hamlets Cemetery Park, which is next door to the building site. The meeting was curiously respectful in the way in which it expressed its concerns.  Its request was that “further consultation is carried out with the Cemetery Park to address outstanding concerns particularly in relation to light pollution.”

If councillors were concerned to protect the Park, why didn’t they ask the developer to change the application to accommodate the concerns?  Asking for “further consultation” is easily done and is not necessarily effective.  We understand that further consultation has indeed been carried out, but those who run the Park are still worried about the effect the development will have on its plant and wildlife.

However, the blockbuster news is hidden away in paragraph 2.7 of the report from the Corporate Director of Place to the next Committee meeting. “Members should also note,” he says, “that the proposed development […] will take approximately 12 years to be delivered in full”. The Director mentions this in passing, as a reason why the Committee’s decisions should not be too detailed: the work will take such a long time, planning law may change before the later stages are ready to be approved.

Officers are recommending that the Committee agree that the developers must submit a “Construction Environmental Management & Logistics Plan” to the Committee, to minimise disruption to the surrounding community. The developers must set out how they are going to minimise dust and manage other aspects of the building works – but no development of this scale can be carried out without causing major disruption. At least the Plan must include a telephone number and email for the site manager, and details of a complaints process.

Councillors who are members of the SDC cannot be whipped by their political party and they must take their decisions on the basis of the merits of the application, guided by the Council’s overall planning policy.  Whatever the decision of the Committee on Tuesday, Executive Mayor John Biggs is not directly at fault.  However, the Council’s planning policy which has enabled the application is one of the flagship policies of this Administration. It encapsulates John Biggs’s vision for the borough of Tower Hamlets. Twelve years of misery during the building process will be hard enough. Living within a community packed like sardines into the new dormitory district of Bow could be a living nightmare.

2021-01-17
admin1
Previous: STWC calls on the world to stop the war in Yemen
Next: Hackney gym faces fine for Covid regulation breach