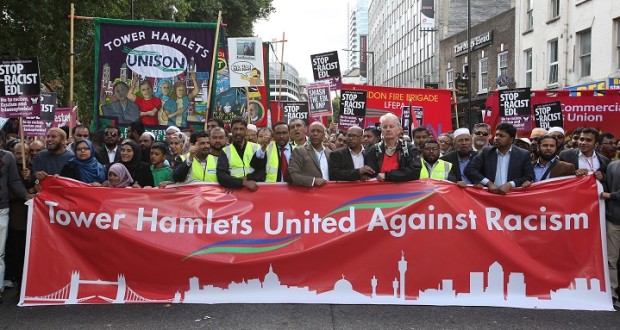 United protest in Altab Ali Park and Whitechapel High Street in opposition to the English Defence League (EDL) proposed march through Whitechapel, September 2013. Acting together against Islamaphobia encourages integration, not alienation from society.

You can snub a Muslim in any language…

David Cameron has announced that Muslim men and women who come to the UK on a five year spousal visa to join their wife or husband will, half way through the visa, have to prove that their English is improving in order to win the right to remain. It is hard to believe that Cameron thought this through before he opened his gob.

Cameron gave two explanations of why Muslim spouses had to learn English to carry on living in the UK.

•First, this was to help tackle segregation of women. Cameron told the BBC that 22% of Muslim women in England speak little or no English. They are also living segregated lives, which allows “appalling practices” such as female genital mutilation (FGM) and forced marriages to take place. Cameron also intends to review religious councils – including Sharia courts, which he sees as a place where men exercise “damaging control over their wives, sisters and daughters.”

•Second, Cameron said learning English would help women resist the attraction of extremism. As commentators asked what the link was between lack of fluency in the Queen’s English and being attracted to extremism, Cameron was forced to back down and admit that lack of fluency did not cause extremist views. He then told the BBC that there was some kind of connection after all, and that learning English would “help people become more resilient against the messages of Daesh.”

To tackle this state of affairs, the Prime Minister has found £20 million, presumably down the back of the No. 10 sofa (why didn’t he look down there when the junior doctors were refusing to work more hours for less money?). That’s excited the Islamophobes, who are trying to turn the debate into a discussion of why the non-Muslims are having to pay to educate the Muslims.

Since the announcement was made, there has been a queue of people protesting and stating how unhelpful it is to link English language skills with susceptibility to extremism. Dal Babu, a former Metropolitan Police officer, asked where the figure of 22% of women not speaking English came from, pointing out the research undertaken by the Runneymede Trust put the figure at 6%.

However, the main problem with Cameron’s statement is the underlying assumption that British ways of doing things have to be imposed on Muslim women for their own good. FGM is a very bad thing – and women’s groups (yes, segregated political organisations!) in the UK were educating about and campaigning against it for at least two decades before the Government took up the issue. There should never be a hierarchy of abuse, but it does have to be noted that the politicians who denounce FGM have presided for decades over a society in which sexual abuse of young men and women by the powerful in society was tolerated and covered up by the establishment. That doesn’t make it wrong to criticise FGM, but it does put Cameron’s criticism in context. The same applies to forced marriage – another form of sexual abuse of children and young women.

It is not clear whether Cameron’s review of religious courts will extend to Jewish courts, which are also male-dominated and which allow men to exercise power over women’s lives – or what the results of the review will be. At the moment all that can be said is that Cameron may brush off allegations of Islamophobia but may have more trouble dealing with potential allegations of anti-semitism if the review criticises both systems. If it only criticises Sharia Courts, Cameron will face allegations of bias.

On the link between speaking English and being attracted to extremism, commentators in number have pointed out that it tends to be the older Muslim spouses who have not mastered English, while the women who have supported Daesh (as one measure of susceptibility to extremist propaganda) tend to have been born and educated in the UK. They are likely to be fluent in English – and alienated from western society because of its Islamophobia. It is alienation from a society which sees them as second class citizens, “not one of us”, doing things wrong which propels them to support sects which criticise western society for Islamophobia. Daesh spreads its word on social media: quite often in English.

Like many of his recent policies, Cameron has hauled this one down from the Yes Minister shelf of interesting ideas to appease the right wing media. What he doesn’t admit is that the Muslim spouse who learns English will be integrated or alienated on the basis of the indigenous population’s attitudes towards him or her, not on how well he or she can speak English. If you go into a shop and say “Good Morning”, rather than stick to the shops where you can say As Salaam Alaikum (to use one of the possible spellings), it will not make you feel integrated if fellow customers respond to your greeting by spitting in your face. And in the UK today, that reaction can be elicited from just the sight of someone in traditional Muslim dress, even before they speak.