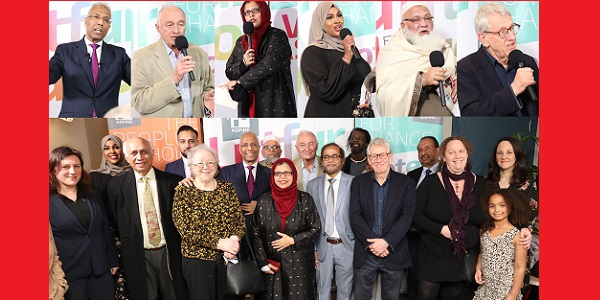 And they’re off! Aspire showcases breadth of support

ON 5th MAY, London’s voters will be going to the polls. All local council seats are up for election – as are Directly Elected Mayors, in those boroughs which have them. We’ll be looking at all the mayoral candidates in Tower Hamlets. We began with Labour, Party of the sitting Executive Mayor. Today we look at his main rival: Aspire, whose candidate is Lutfur Rahman.

Aspire
Football’s coming home, they tell us. The Aspire Party, with the little graphic of a house as its logo, seems to be heading for home too – though they are probably hoping to get there even more quickly than the football. And for the youngest Party in Tower Hamlets, home is definitely where their heart is: they sound as if they are really part of the community, both in terms of policies and community endorsements, rather than applicants for the job of “distant career politician”. 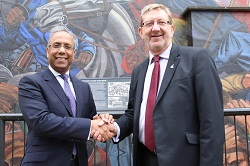 Len McCluskey, then General Secretary of Unite, the largest trade union affiliated to the Labour Party, was proud to shake Mayor Lutfur Rahman’s hand as they celebrated opening of a Unite Community Centre in Shadwell.

Lutfur Rahman’s record
Traditional style leaflets have not been deluging the borough, but they have been appearing on doormats and circulating on social media with disciplined regularity. The first phase of communication reminded voters of Lutfur Rahman’s record in office. It’s a long list, when you see it all summarised like this: positive achievements over a wide range of commonly used, core Council services.

Alongside the list of achievements came some personal endorsements. Lutfur Rahman must surely be the first candidate for public office in Tower Hamlets to have been endorsed by a candidate for US president – in his case, the Reverend Jesse Jackson, the first BAME candidate for that post.

Community endorsements of Lutfur Rahman
More endorsements were made by speakers at Aspire’s formal campaign launch – extracts from which can be seen on Lutfur Rahman’s Facebook page and widely on social media.

This is perhaps the most impressive aspect of the Aspire campaign because it showed off Aspire’s and Rahman’s ability to reach so many groups of voters.  The launch was compered by two young Bangladeshi professionals who have been brought up and educated in Tower Hamlets and who personify the progress that has been made by this community. Stalwarts of grassroots campaigns spoke up in support too: Bangladeshi, European and Somali activists, young activists and seasoned campaigners. 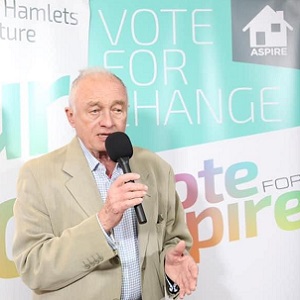 The second best bit of the launch was Ken Livingstone’s speech, in which he recounted how he went into City Hall the morning after he was first elected London Mayor – arriving at the same time as the newly elected GLA member John Biggs. Livingstone extended his hand to Biggs – who refused to shake it. Twenty-one years later, John Biggs walked out of the Weavers ward by-election count rather than listen to Aspire’s winning candidate’s acceptance speech. You can’t claim Biggs is not consistent. 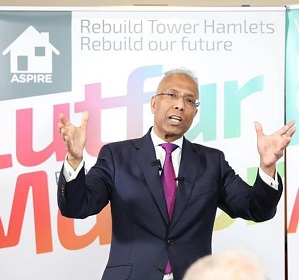 Lutfur Rahman sets out his vision.

The best bit of the launch, though, was Lutfur Rahman’s own speech: an overview of his first Administration, a critique of Labour’s time in office, and a vision of a positive future. Rahman saw the elections on 5th May as a turning point for Tower Hamlets, when voters would have a say on whether they wanted more of the same cuts and contractions, or whether they wanted the Council to return to investing in and listening to the community. 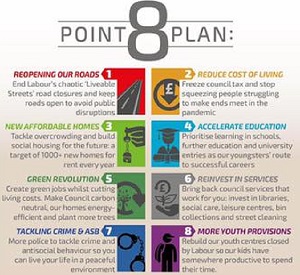 A plan for the future
The latest leaflet to escape from Aspire HQ highlights the Aspire “8 Point Plan”, the bedrock of its campaign. The “points” vary from the speedy intervention to halt Labour’s unpopular “Liveable Streets” policy to the longer-term plans for investment in core council services. There’s the re-appearance of traditional Lutfur Rahman policies (invest in housing and education) alongside newer plans (for a Green Revolution). We are promised a full manifesto very soon.

Will it work?
Lutfur Rahman is not everyone’s cup of tea, but at least he has a clear strategic vision which he communicates well – and his policies press a large number of buttons. While many commentators wrote him off as yesterday’s man, Rahman and the Aspire Party have come out fighting and they have an air of competence about them which has probably surprised some of the other Tower Hamlets-watchers. They even look as if they are enjoying the campaign.

We’ll only find out if Aspire policies improve the lives of those in Tower Hamlets if residents come out and vote for Lutfur Rahman and his band of Aspire council candidates. All we say for certain (well, pretty much for certain) is that if Lutfur Rahman emerges the winner when the votes are counted, John Biggs isn’t going to rush forward to shake his hand.

2022-04-20
admin1
Previous: Met police declare “StreetSafe” a success
Next: Ilford girls and Met police check each other out