Don't Miss
Home / Crime / Arsonist on the loose in Hackney 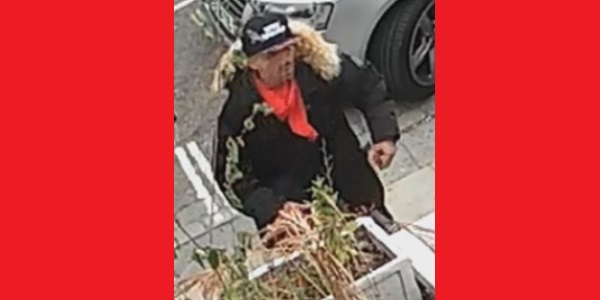 Arsonist on the loose in Hackney

TEN PEOPLE escaped injury when fire broke out in the basement of a property in Clissold Crescent, Hackney, on 20th June. An investigation revealed the fire was started deliberately – and police are now looking for a suspect who was caught on CCTV outside the house.

The suspect is described as a man of mixed race aged between 35 and 40. He was wearing a black coat with a brown fur hood and black trousers. He had black trainers and was wearing a red scarf and a black cap with a purple and white peak, which had “Spare Raiders” written on it.

Police believe that the suspect left the scene on a white B-twin mountain bike, heading in the direction of Clissold Park.

Detective Constable Dean Barnett, from Hackney and Tower Hamlets CID, said, “We believe this to be a targeted incident and it is lucky that none of the ten people inside the property – a number of whom were asleep at the time – were injured. We urge anyone with any information which could help progress this investigation to get in touch.”

•Anyone who believes they may be able to identify the suspect or has any other information about the incident is asked to contact police via 101, quoting reference 1517/20Jun. Alternatively, you can call Crimestoppers on 0800-555 111, where you can give information anonymously.

•Read more about it:
Where is William Deo?
Hackney knife man jailed