Don't Miss
Home / Politics / Ask the mums, not the mayor! 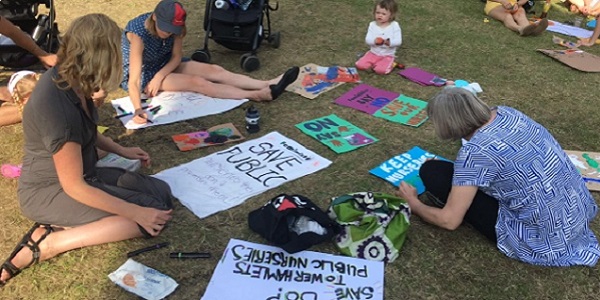 Mums and children produce "Save the Nurseries" posters.

Ask the mums, not the mayor!

WORRIED MOTHERS are asking where the Council consultation on closure of the Local Authority Day Nurseries (LADN) is – not least because the Cabinet report proposed to begin formal closure in “late July 2018”.

“We’ve had a week already,” said one mother who had been at the Ask the Mayor earlier this week, “We want to know what is happening. We’ve asked the mayor, and he doesn’t seem to know.”

The mothers were concerned because the report which went to the Cabinet on 27th June proposed that the Mary Sambrook nursery should close at the end of July, that John Smith should close at a later but unspecified date, and that Overland should close in “the first half of 2019”.

“They said their funding is running out in September 2018,” said another mum. “It’s a bit late to be acting upon something like that. They must have known this earlier. They consulted the nursery schools about the LADN funding in early March – why did they wait till the end of June to consult parents who use the nurseries?”

“All those ideas about handing over the nurseries to the private sector,” said the first mum, “it was just to buy time. Basically it wasn’t about giving us a true answer. They knew exactly what they were going to do, but they kept it under cover all this time.”

“The meeting was dreadful,” said the second mum. “We were asking questions but Cllr Sirajul Islam, who was chairing, just kept cutting us off. He was a disgrace. He didn’t want us to ask any questions and he was really patronising. He didn’t make any eye contact with me and every time I indicated I wanted to ask a question, he just veered off to ask another person.”

“After my first question, he wouldn’t let me speak. We were just not treated fairly,” said the first mum. There had been around 20 members of the public at the two hour meeting, so the mothers felt there had been time to give them a full hearing.

The mothers said that they felt that they had not received answers and that the Executive Mayor had just taken notes and said he would look into their concerns. They were left wondering how the mayor could have taken a decision in Cabinet if he did not have the facts at his fingertips.

“I feel that John Biggs does not understand the challenges of finding childcare,” said the second mum. “He doesn’t seem to acknowledge that childcare starts when children are very young. Not all mums can stay at home till their child is three and goes to nursery school.”

•Read more about this story:
Biggsmania loses out to the footie

•Read more about it:
Biggs under fire as he moves to close nurseries
Nursery campaigners surprise Biggs at suffragette event

2018-07-06
admin1
Previous: Arsonist on the loose in Hackney
Next: Two arrests as guns found in Dagenham