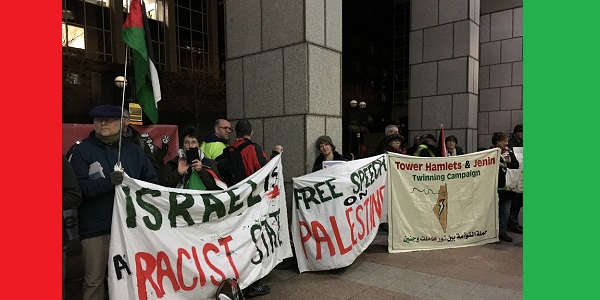 Supporters of the PSC petition lobby the Council.

IT WAS A cold evening in Tower Hamlets, but plenty of warmth was generated outside the Town Hall as supporters of the Palestine Solidarity Campaign (PSC) lobbied the Council last week, hoping to secure free speech on Palestine.

Last year the Council adopted a new definition of Anti-Semitism. Local PSC members asked for a clause to be added confirming that residents would be allowed to criticise the actions of the Israeli state. Tower Hamlets Executive Mayor John Biggs refused, claiming that the policy didn’t specifically outlaw such criticism.

Later that summer, his officers refused to allow a charity, the Big Ride, to hold an event in a Tower Hamlets public park (see link below for the full story). The charity raises money to help Palestinian children. Officers told the local PSC Group that the booking was refused on grounds of practicalities – but the Group obtained copies of emails between the officers. These showed that the officers had turned down the booking because they feared that it might contravene the new Anti-Semitism policy: raising money to help Palestinian children might be regarded as an Anti-Semitic act. 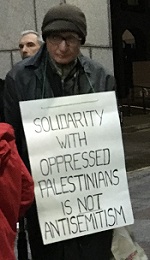 One of the petitioners outside the Town Hall last week.

Last week members of the local PSC Group took a petition to the Council asking them to amend their definition of Anti-Semitism by inserting a clear statement that the policy would not be used to silence political criticism of the actions of the state of Israel.

Before the petitioners could present their petition at the Council meeting later that evening, Cllr Victoria Obaze, Speaker of the Council and in the Chair, upped the tension by warning everyone that they must present and debate the petition in an orderly manner.

Chief petitioner Sybil Cock was allotted three minutes to present the petition. She told the Mayor, Deputy Mayors and Councillors that the group had wanted a nice event last summer in a Tower Hamlets park, but had been thwarted by council officers who feared the event organisers may be extremists and the event might be Anti-Semitic. She told councillors that those who want to tackle injustice have to begin by describing that injustice accurately and asked them to adopt the Freedom of Speech caveats to their definition of Anti-Semitism. She also asked them to welcome the Big Ride to Tower Hamlets in 2020.

Three Councillors put questions to Sybil Cock.
•Ms Cock told the first, Cllr Gabriela de Salva, that the Council’s position should not confuse Anti-Semitism and genuine political disagreement. If some were to say that the state of Israel was an apartheid state, that would be a legitimate political viewpoint with which one could agree or disagree and which one could debate. It would not be an anti-semitic statement.
•Cllr Puru Miah told Ms Cock that free speech is a cornerstone of democracy. He pointed out that a number of authoritative bodies had expressed concern that the definition of Anti-Semitism adopted by this Council and some other bodies did, in fact, restrict freedom of expression.
•Cllr Andrew Wood pointed out that he had expressed criticism of the Israeli government. He asked whether any other public bodies had adopted statements other than the standard IHRA definition.

At that point, the Speaker announced that time was up. Cllr Wood did not get an answer, and this was the extent of the Council’s debate on freedom of speech. 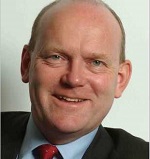 Executive Mayor John Biggs then responded to the debate. He said that because this was a contentious issue for the petitioners he would read out a written response. A representative of the Council’s press office promised to make this available to the press: we await hearing from them. In the meantime, all we can say, from notes made on the night, is that the Executive Mayor expressed sympathy for the Palestinian cause. He pointed out that the petition asked the Council to adopt caveats and said that there were different views [on whether this was wise]. He said that protecting Jewish people from abuse is not stifling free speech. He said that it is acceptable to criticise actions of the Israeli state and to show solidarity with Palestinian people, but the definition of Anti-Semitism adopted by the Council does not stop that. He added that while the Council’s definition of Anti-Semitism was considered by officers who were deciding whether to let the Big Ride hire a park, it was not part of the final decision. Finally, he pointed out that the Council had no power to recognise Palestine: the Council’s Monitoring Officer had, in fact, initially ruled that night’s petition out of order, as it was a concern of the Foreign and Commonwealth Office, not the Council.

The petitioners then returned to the public gallery – where members of the public sat stunned by this spectacle. What does it tell us?

•The Council structures are demeaning rather than helpful to members of the public who wish to raise concerns. To have three minutes to present a petition and then a similar length of time for councillors to ask questions and for the petitioners to answer them – before the Mayor or a lead Councillor has a minute to reply to the petition – is a token exercise in sound-bite politics which has little chance of influencing the Executive Mayor (or the councillors).

The Executive Mayor has now said – twice, in the Council Chamber – that the Council’s definition of Anti-Semitism does not prevent local residents criticising the actions of the state of Israel. There will be many residents who hope that members of the local Group are now busy penning a request to the Council to hire a park for the 2020 Big Ride rally. After all, such an event would not be outlawed by the Council’s definition of Anti-Semitism – as the Executive Mayor has made very clear.