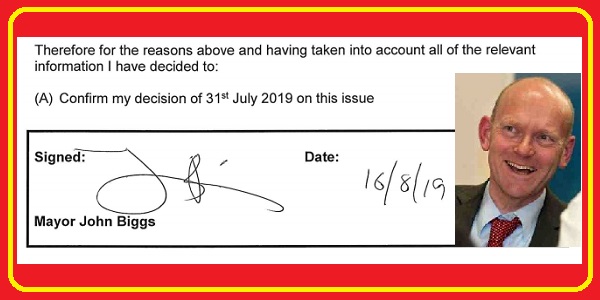 Just two days after councillors on the Overview & Scrutiny Committee (O&S) asked him to reconsider his decision to continue to outsource Housing Management in Tower Hamlets rather than bring the service back in-house, John Biggs announced he was having none of it – and would uphold his own decision without further consideration.

Tower Hamlets Council sold off much of its housing stock to Housing Associations in order to fund works needed to bring the properties up to “Decent Homes” standard. The management of the homes that remained – just over 20,000 – was then given to an Arms Length Management Organisation (ALMO), Tower Hamlets Homes (THH). Over the years, THH’s contract has been extended a number of times.

On 31st July, John Biggs decided to extend the contract for a further eight years – a decision which was announced to the advisory Cabinet that day. That decision was “called in” by five councillors – which required O&S to review it. O&S met on 14th August to do just that.

The main concern of councillors on O&S was the lack of consultation with residents before John Biggs took his decision. Months ago, the Executive Mayor had commissioned a company – Altair – to prepare an options paper for him. The company talked to a number of residents about the service which THH provide – and duly provided a long report.

Altair reported that they had spoken to around 700 residents in focus group-style meetings. They had also obtained views about THH by phone and online. These conversations had been about how THH worked as a managing organisation – not directly about whether housing services would be better delivered in or out of house.

Executive Mayor John Biggs then took his decision to extend THH’s management contract and wrote to all THH residents inviting them to comment on his decision. There were around 200 responses from the 20,000 homes owned by the Council and managed by THH.

At the O&S review meeting, Cllr Sirajul Islam, Deputy Executive Mayor and Cabinet Member for Housing, stood in for Executive Mayor John Biggs. O&S Chair Cllr James King asked Cllr Islam if 200 responses from 20,000 homes was an adequate response or a sign that the consultation was inadequate – not least because nearby Councils which had held similar consultations had received much larger responses.

Cllr Islam responded that the consultation response was disappointing – but adequate. Residents in the public gallery during the O&S meeting were heard muttering, “if this is consultation, I’m a banana.”

•Read more about it:
Biggs deep in controversy over political use of parks
Biggs consults on clobbering kids’ services (again)