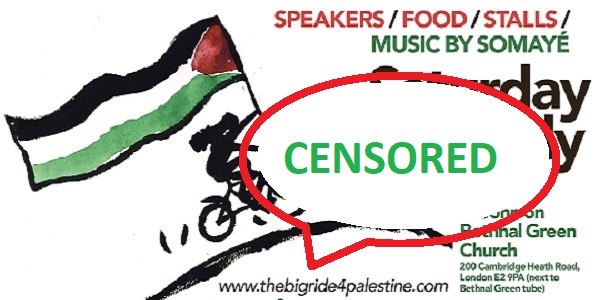 TOWER HAMLETS COUNCIL has been found out refusing to host a charity event organised by the Palestine Solidarity Campaign (PSC) – on the grounds that it might be construed as anti-semitic.

An article in The Guardian today has revealed that the Council was asked to host the fifth annual Big Ride for Palestine when it finished its sponsored journey, raising money to help Palestinian children. However, Council officials assessed the event against the Council policy established around a year ago, when councillors voted to adopt the International Holocaust Remembrance Alliance’s (IHRA) definition of anti-semitism.

At the time, members of Tower Hamlets PSC spoke to the Council and implored them to add a sentence to the policy to make it clear that campaigning for the rights and material needs of Palestinian people would not be outlawed by the policy. Councillors declined to adopt that clarification.

Now emails between Council officers, released after the local group made a Freedom of Information request, show that show that this was precisely the issue which Council officers discussed as they considered whether to host the event. They believed that some statements on the PSC website conflicted with the Council’s policy.

A Tower Hamlets council spokesperson told The Guardian, “The council gave the application careful consideration and decided not to host the event, because we do not host rallies with political connotations, albeit without direct links to political parties.”

Local activists who are firmly opposed to anti-semitism but also want to speak out in favour of Palestinian rights are furious at the revelations, which many of them see as unjustified censorship. There are discussions on what steps to take next.

•To read the full article in The Guardian, go to:
Guardian article