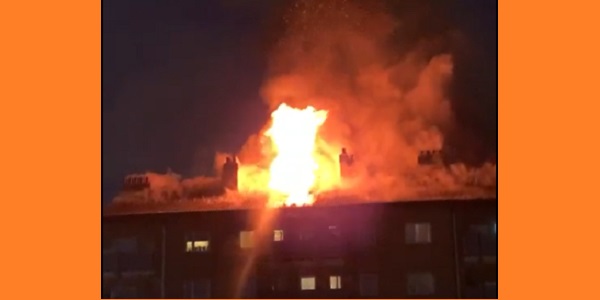 FORTUNATELY there are no reports of deaths or injuries after a fire broke out in flats in Hadleigh Close, E1 in the early hours of this morning, Thursday, 28th May. One man was taken to hospital as a precaution.

Eighty firefighters and ten fire engines were called out at 3.28 am to attend the fire on the Bancroft estate, just north of Mile End Road. A total of 25 emergency calls were made. Hadleigh Close lies in the middle of a swathe of housing bounded by Cambridge Heath Road on the west and Globe Road on the east. Although much of the roof of the building appears to have been destroyed, fortunately the solid structure of the old building did not allow the fire to spread further.

The firefighters battled for two hours to bring the blaze under control. Given the scale of the response needed, firefighters had to be drawn in from stations in Bethnal Green, Whitechapel, Shoreditch, Dowgate, Homerton, Soho, Islington and S|tratford.

Over 100 residents left the building during the blaze. Two women were rescued from the fourth floor by firefighters using a ladder. A man and a woman were also rescued, leaving the block via the staircase.

Firefighters were still present at the scene in the morning, as fire investigation officers began to investigate the cause of the blaze.  It is thought the fire began in a fourth floor flat.

Eye witness film: the blaze from a distance