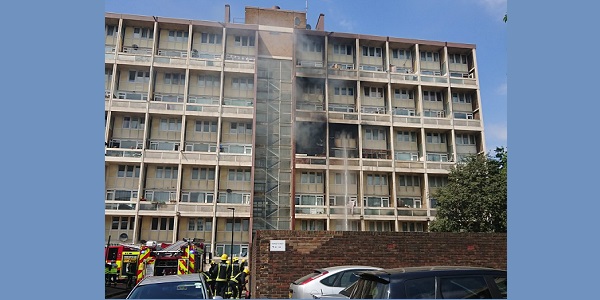 BREAKING NEWS: Firefighters and police are attending a fire in Ramsey Street, Bethnal Green. Ramsey Street is in the north-west corner of the junction between Vallance Road and Three Colts Lane.

It is thought that the fire broke out shortly after 2pm today, 4th July. Balconies on the fifth and sixth floor of the block are alight. Four fire engine, staffed by 21 firefighters, are in attendance.

Traffic controls are in place and the D3 bus has been re-routed. People, especially drivers, have been asked to avoid the area to give the emergency services room to work.

•STORY UPDATE 1
The fire in Ramsey Street is now under control. The Fire Brigade has confirmed that the fire was in a split level maisonette on the fifth and sixth floors.
Two men received treatment at the scene for smoke inhalation and one was taken to hospital. No other injuries have been reported. The Fire Brigade will now investigate the cause of the fire.

•STORY UPDATE 2
The Fire Brigade has announced today, 7th July, that initial investigations suggest that the fire in Ramsey Street last Wednesday, 4th July, was caused by a cigarette which had been discarded on a balcony.
According to their records, the Bethnal Green fire was the seventh fire in the last three weeks to be caused by smoking.

•Read more about it:
Biggsmania loses out to the footie
Labour condemns Tory social homes fail

2018-07-04
admin1
Previous: Biggsmania loses out to the footie
Next: Jail for Romford robber