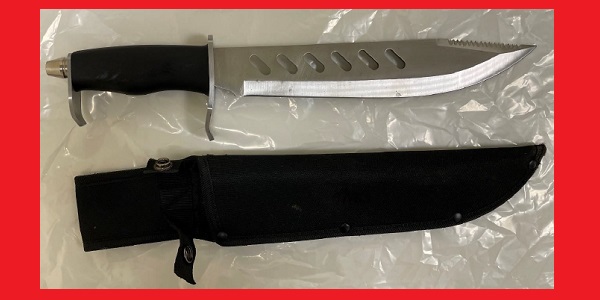 The Rambo-style knife found during the search

A POLICE PATROL in the London Fields area, E8, has uncovered a number of knives, a small amount of cannabis and two motor vehicle registration plates.

As the patrol went along Wilman Grove at around 6pm on 20th January, they saw a group of young men gathered around a parked car. Quite what made the police suspicious is not clear. They have stated that the car was “parked suspiciously near to a bin shed”, which is not very clear. Was the car parked suspiciously and near a bin shed?  Or was it parked in a proximity to the bin shed which was suspicious? They later went on to say that the operation was intelligence led.

In any event, as the police went up to the group, two men walked off. The patrolling officers spoke to the five young men who remained and, detecting a smell of cannabis around them, they searched the men, the car and the nearby bin shed.

Police found three lock-knives, £1,000 in cash and a small amount of Class B drugs hidden in the roof lining of the car.  They also found a large Rambo-style knife and two sets of registration plates in the bin shed.

The three lock knives found in the search

Detective Constable Tony Curtis of the Central East BCU CID said, “This is a great example of intelligence-led stop and search. Four potentially lethal weapons have been seized and will no longer be able to cause considerable harm, or worse, in the community. Stop and search helps keep Londoners safe and removes dangerous weapons from the streets.”

●Anyone who has any information about drug or knife crime is encouraged to phone the police on 101. Alternatively you can contact Crimestoppers on 0800-555 111 and give information anonymously.

●Read more about it:
Teen caught with knife in Vicarage Lane
Dopey dealer helps himself to drug delivery