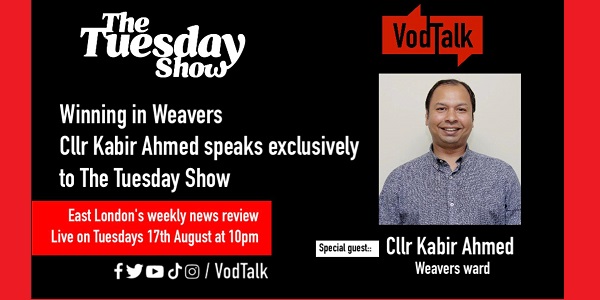 Cllr Ahmed will be the studio guest on this week’s The Tuesday Show on the VodTalk Facebook page. The show is broadcast live from 10-11pm and is then available on the same Facebook page to view on demand.

Cllr Ahmed will talk about the theme that united voters and opposition parties in that by-election: the widespread feeling that the Labour Administration – and, in particular, Executive Mayor John Biggs – are not listening to local residents. Why did Aspire believe that local feelings had reached the point at which they had to stand a candidate for the Council? And what will the new councillor do to make those views felt in the Town Hall?

Although the by-election was in Weavers ward, concerns about the Labour Administration are rife across the borough – particularly with Labour’s programme of street closures in residential areas. Viewers from across Tower Hamlets – and beyond – are welcome to ring into the studio and speak to Cllr Ahmed direct.

●Read more about it:
Is that a bit of egg on your chin, Mr Biggs?
Councillor candidate bludgeoned on campaign trail