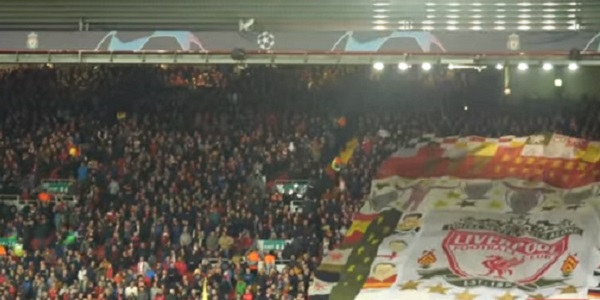 AS FANS RETURN TO Anfield after a long Covid-related layoff, Liverpool FC has announced that paper tickets have been ditched in favour of new technology and ID cards.

The Premier League has encouraged clubs to find ways for ticket-holding fans to use digital technology to enter their club’s ground. A new system has already been tried out at Anfield, and it begins in earnest when Liverpool play Burnley in their first home match of the season, on Saturday.

Fans will have to come to terms with a number of new arrangements. There will be no more paper tickets (sent out or emailed out for printing at home), and access to the ground will only be by electronic tickets, which fans will have to download onto their phone, or photo ID cards. Fans will be emailed a time slot in which they should arrive. Slots will be staggered and will be early enough to allow for checks and searches to be carried out.

The changes are not all digital, though. For the time being supporters are asked to wear a face covering; to observe social distancing when moving in or around or out of the ground; and to take a Lateral Flow Test 24-36 hours before kick-off.

Fortunately, the Club has stationed Help Desks around Anfield, where confused fans or those who have experienced a problem can obtain assistance. There will also be a major technical advice and support service in the Kop Bar.

●In player news, it is being reported that Liverpool captain Jordan Henderson has agreed the principles of a new deal which will see him extend his contract. Currently at the start of the final two years of his contract, HendersJon is said to have agreed a new three-year deal, with an option to extend it for another year – giving Henderson a long-term future with the reds. Meanwhile midfielder Leighton Clarkson, who has a long-term contract with Liverpool, will be on loan to Blackburn during the coming season. The Club hopes this will allow Clarkson to develop as a player and gain more experience of premiership match play.