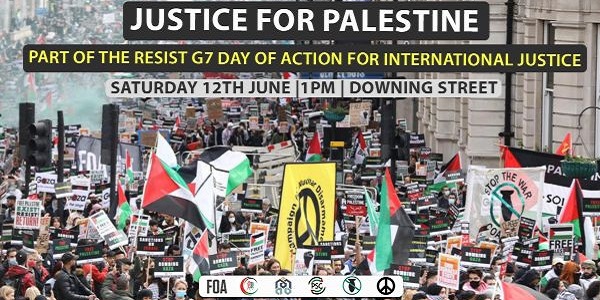 SEVERAL GROUPS have joined together to organise protests at and about the G7 summit which is to be held in Cornwall next weekend. One of the main issues protestors wish to raise is the G7 countries’ support for the Israeli state, despite its military attacks on Gaza.

The G7 countries – Canada, France, Germany, Italy, Japan, the UK and the USA – co-operate in order to keep their economies strong and political dominance of the globe unchallenged. Inevitably their meetings attract protestors, whose demonstrations are usually kept far from the conferences by the police and security forces in the various countries where the meetings take place. This year, popular anger at the attacks on Gaza have prompted two actions to take place one in London and the other in Cornwall. 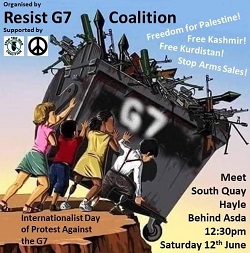 The Stop the War Coalition held an online meeting on 2nd June where speakers – including Tariq Ali, Claudia Webbe MP and Salma Yaqoob – discussed the reasons why the West backs the Israeli state and the effect of that support on the Middle East.

●The meeting is available to view here:
Palestine, Biden & War in the Middle East