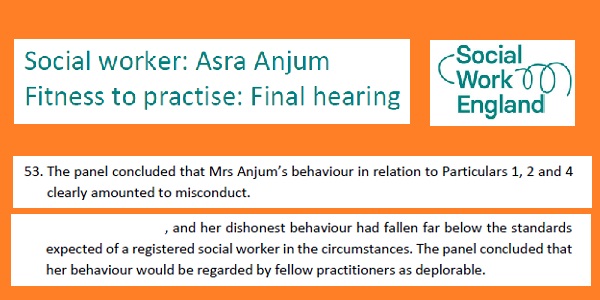 Extracts from the Panel's report.

QUESTIONS ARE being asked as members of the Poplar & Limehouse Constituency Labour Party (CLP) are becoming aware of a document which seems to show that their Secretary has “brought her profession into disrepute by reason of her dishonest behaviour” (para 59). Worse still, the Secretary worked for Tower Hamlets Social Services.

The document which is being circulated in the Labour Party is freely available on the internet.  It is the record of a hearing carried out by a Panel on behalf of the Fitness to Practise Committee of Social Work England, which regulates the profession in England. The hearing concerned a social worker named Ms Asra Anjum, who is also the Secretary of Poplar & Limehouse Labour Party.

The allegations put to Ms Anjum were that she had recorded having made visits to certain foster carers (in early 2017) which had not in fact taken place. The allegations were first put to her by a member of staff referred to as “SL”, who was carrying out an internal investigation for Tower Hamlets Council in May 2017. The evidence of this internal investigation was reported to the recent Fitness to Practice hearing, whose report states, at para 32:

“The panel took account of the evidence of SL’s meeting with the Social Worker on 19 May 2017 in which Mrs Anjum initially claimed to have visited the two families. SL said that after she informed Mrs Anjum that the two Foster Carers had been contacted, Mrs Anjum agreed that the visits had not taken place and that she had been with a friend at the time.”

The hearing also reported on the evidence it had taken from Ms Anjum direct, at paragraph 36:

“Mrs Anjum […] accepted that she had made the records referred to [above] in order to mislead the Fostering Team into thinking that she had in fact carried out the visits.”

At paragraph 37, the Panel reports:

“The panel concluded that Mrs Anjum knew what she was doing was wrong, and that she was acting dishonestly.”

The report details various mitigating factors which Ms Anjum put to the Fitness to Practice Hearing. These include a statement that she failed to visit the foster carer because she was prioritising other foster carers with greater needs and an acknowledgement that she should have discussed this with her supervisor rather than acting on her own initiative. She had a long career, during which she had never put any child at risk of harm and felt that she had insufficient support from Tower Hamlets Council at the time of the false recording.  She also told the Hearing that she did not know why she had acted dishonestly.

The Panel took these factors into account. They found that two counts of recording that she had visited a foster carer whom she had not in fact visited amounted to misconduct, but a third incidence of this was confusion rather than misconduct.  They also felt that it was unlikely that Ms Anjum would repeat her dishonest behaviour and that she did not present a risk to the public.  They accepted that she showed genuine remorse for what were two isolated events after “an otherwise unblemished lengthy career”. They concluded that “the dishonesty had been deliberate” – “but at the lower end of the scale of seriousness for deliberate dishonesty.”  The Panel imposed a warning for a period of three years.

Children’s Services are rather a touchy subject for the local Labour Party. At the start of 2017, 18 months after Labour had taken over the mayoralty, Ofsted inspected the service and in April 2017 it issued a report stating that the service was “inadequate”. In September 2017 it sent in “Intervention Advisers” to monitor the service and ensure that it improved.

Local Labour Party members will be concerned that Ms Anjum has been found to have falsified professional records – and also that she was confused over events which, at the time of the internal investigation, were very recent.

The Fitness to Practice Panel found that Ms Anjum had “brought her profession into disrepute” (paragraph 59).  Local party members will now be wondering whether Ms Anjum has also brought the Labour Party into disrepute.

We have asked Ms Anjum for her comments.