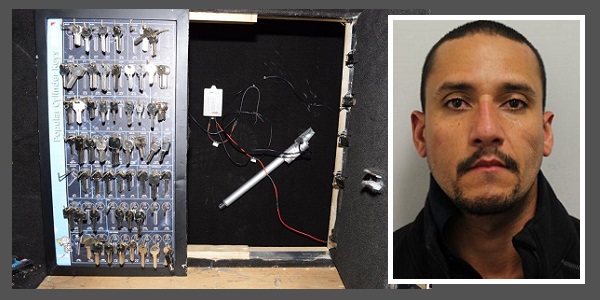 Alex Guest (right) and the compartment hidden behind the locksmith's cabinet in his vehicle.

THE CLASS A drugs were well hidden, but police officers managed to find the haul – and jail the locksmith who had gone to great lengths to hide them. It is estimated that the drugs were worth £1.5 million.

The man jailed is Alex Guest, 40, of Boleyn Way, Ilford. He pleaded guilty to charges of possession with intent to supply and possession of criminal property at Snaresbrook Crown Court on 30th June 2020. He returned to the Court on 30th March 2021, where he was sentenced to 11 years and three months’ imprisonment.

Guest had been arrested in April 2020 at the end of an intelligence-led operation, when police stopped a van he was driving on the M11 southbound near the junction with the A406 in Redbridge. It was in the van that officers found a hidden compartment in the partition wall – covered by a locksmith’s cabinet. In the compartment was 15kg of cocaine, a set of electronic scales and several mobile phones. Police found £129,000 in cash at Guest’s home and two hydraulic press machines at an address he had links to.

Detective Constable Russell McIntyre, the investigating officer from Specialist Crime, said, “Guest was part of an organised network importing large amounts of cocaine into the UK, almost routinely. Using his legitimate locksmith business as cover, he thought he could conceal his involvement by using an elaborate hide – he failed. This investigation is an example of great team work which led to us taking a huge quantity of harmful Class A drugs off the streets of London. Drugs blight communities and ruin lives and we will continue to robustly target those responsible for bringing them into the capital.”

●Read more about it:
Hackney is centre of catalytic car crime
Suspect arrested after Ilford stabbing is just 12 years old