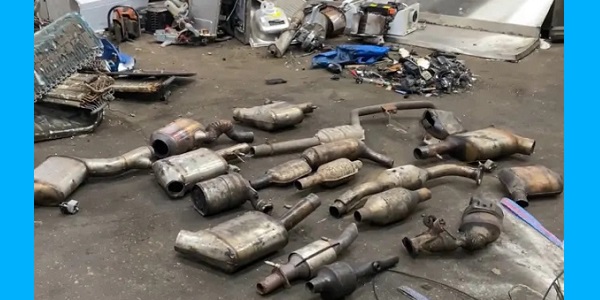 A PLAGUE OF THEFTS of catalytic converters has been sweeping across London – and a thorough police operation at the end of last month has put a spoke in its wheels.

It took 300 police officers from the Metropolitan Police – supported by police from Essex and Kent, the Government Agency Intelligence Network and the British Transport police – to mount the raids that were the culmination of a year-long police investigation. The raids took place in the early hours of 23rd March and 150 officers were needed out on the streets to executive eight warrants in and around Millfields Road, Lower Clapton, in Hackney.  Officers were assisted by the Metropolitan Police Dog Section and the National Policing Air Support Unit.

The shipping container impounded on the Essex coast.

One of the premises raided by the police was a metal processing plant, where tens of catalytic converters and a smelting machine were found – all of which police believe to have been stolen.  Some of this may have come from telecommunications masts and the theft may have disrupted residents’ internet services.

While the raids were going on in Hackney, police intercepted a shipping container off the Essex coast. They believed it contained stolen metal and car parts and was due to sail to the Ivory Coast, with the intention of having the metal processed there.

Detective Chief Inspector James Stanyer, the Metropolitan Police Lead Officer for Motor Vehicle Crime, said, “The criminals involved in stealing catalytic converters often commit their offences in full view of the owners of the vehicle and other members of the public, leaving them shocked and terrorised. [….] The intelligence gathered during this investigation will ultimately lead to more proactive work to prevent this crime and bring those involved in it to face the consequences of their actions.”

●Read more about it:
Three arrested after shooting in Hackney
Sixth teen charged after murder of cabbie Gabriel