FIREARMS, DRUGS, robbery – a list of offences has put Leon Tyrrell, 23, of Alibon Road, Dagenham, behind bars. The East London youngster was sentenced to a total of 15 years in prison at Snaresbook Crown Court on 15th June.

Weapons found in the premises. 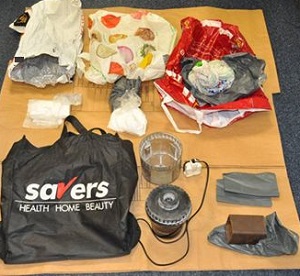 Drugs and related paraphernalia found during the search.

A third man was tried, convicted and sentenced along with the two Dagenham men. Casey O’Hare, 29, of Annalee Road, South Ockenden, was found guilty on 4th May of possession of an imitation firearm with intent to cause fear. He had previously pleaded guilty to robbery and handling stolen goods (a Triumph motorcycle). He was sentenced in total to eight years imprisonment.

The team steal a motorbike.

The sentencing came at the end of a long operation carried out as part of the Metropolitan Police Trident team. They observed the three acting suspiciously around an address in Heathway, Dagenham, last June. Suspecting the three may have weapons, they obtained a warrant.

Police raided the property on 14th June last year, finding weapons and ammunition, as well as drugs and related equipment. They also found a motorcycle that had been stolen (at gunpoint) the previous day and keys to a stolen vehicle, which was found nearby.