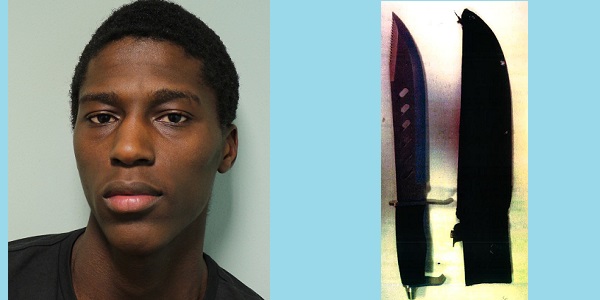 A MAN WHO terrorised families in a shopping centre as he sought to attack a man with a large hunting-style knife was sentenced to 18 months in jail at Snaresbook Crown Court earlier this month.

During a hearing at the same court at the end of May, Arkeem Cabey, 19, of Meadow Close, Barking had pleaded guilty to the charge of threatening a person with a blade in a public place.

The charge arose out of an incident on 29th April in Romford. The police received several reports from the public that a man was brandishing a knife around. Some of those calling in said that the man was trying to attack another man on the first floor of a shopping centre, while others spoke of him having entered a nearby McDonald’s – frightening families who were there with young children, and forcing them to run for their lives.

Police managed to arrest Cabey near the site and they found a large knife nearby too. Cabey initially admitted the knife was his but then refused to respond to further questions. Officers were able to find CCTV footage which showed Cabey speaking to another man in the shopping centre, producing the knife and chasing this potential victim into McDonalds. The footage showed Cabey trying to attack this victim and then running off. The man Cabey was trying to attack has not been found.

Acting Detective Inspector Dean Grafton of the East Area Command Unit said, “Cabey’s actions, which took place in a public place where numerous families with children were enjoying an evening out, were utterly abhorrent. Armed with a large knife, he pursued his victim for a sustained period of time showing absolutely no regard for the safety and wellbeing of those around him.

“Knife crime will not be tolerated and thanks to the swift actions of officers from Romford Town Centre, an off duty officer and members of the public, Cabey was arrested. Good work during the subsequent investigation by the CID ensured Cabey was made to face the consequences of his actions.”

2018-06-22
admin1
Previous: Biggs under fire as he moves to close nurseries
Next: Public prepare for Eid Festivals