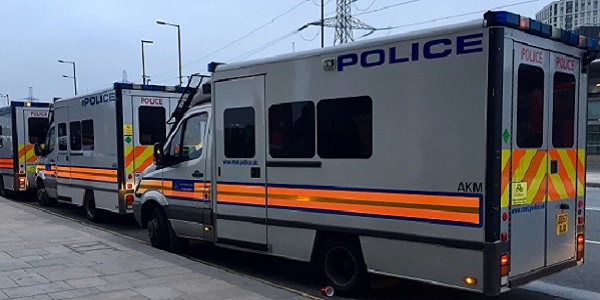 POLICE LAUNCHED a number of raids last week aimed at cracking a “county line” drug supply line suspected of having ferried illegal drugs including heroin and cocaine from East London out to Essex and Suffolk. Five of the raids were on addresses in Newham. 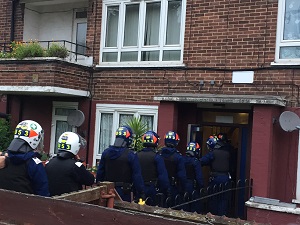 TSG officers execute one of the co-ordinated warrants.

The 80 police officers involved in the operation recovered various items of evidence, including a stolen moped, a ten inch hunting-style knife, a quantity of cannabis and a mobile phone on which, police believe, there may be incriminating information.

Chief Superintendent Richard Tucker, Commander of the Met’s North East Command Unit, said that the arrests “demonstrate the commitment of the Metropolitan Police to reducing the level of violence in Newham and the wider East London area. So-called ‘county lines’ drug dealing gangs from London spread crime and misery into towns throughout England. Working with neighbouring police forces, today’s operation is part of a wider, long-term strategy to combat gang-related activities.”

Detective Inspector Jim McKee of the Met’s Trident Central Gangs Unit said, “Those who run ‘county line’ drug dealing networks are responsible for exporting violence to towns outside of London and we are committed to relentlessly pursuing and disrupting them. We believe the disruption of the drug dealing gangs could have a direct impact on reducing the level of violence in London.”