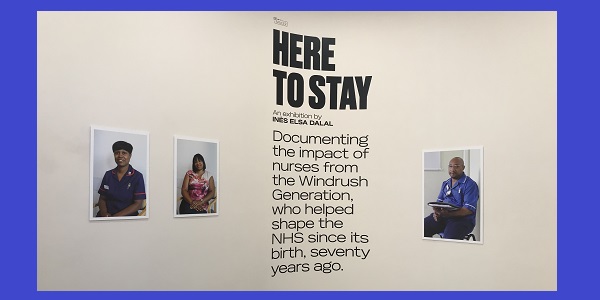 Here To Stay is an exhibition by documentary photographer Inès Elsa Dalal which highlights the impact of nurses from the Windrush generation, who helped shape the NHS since its birth 70 years ago.

Inès is a documentarian, who conducts social commentary projects involving heritage, community, sanctuary, social rituals, portraiture. She utilises reportage photography as a way of gaining knowledge and understanding of different perspectives while documenting a diverse spectrum of people of varying nationalities. Her Swiss, German, Italian and Indian (Parsi) heritage is a natural catalyst for her fascination in kaleidoscopic culture. 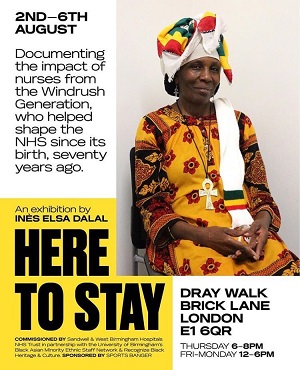 Here To Stay is commissioned by Sandwell & West Bromwich Hospitals NHS Trust in partnership with the University of Birmingham’s Black Asian Minority Ethnic Staff Network and Recognise Black Heritage & Culture. It is sponsored by Sports Banger.

Before the launch, and appreciating the support implied by the commission, Inès said, “The NHS was first established on 5th July in 1948. To celebrate, Sports Banger has invited me to exhibit the beginnings of a portrait series of nurses, including those from the Windrush Generation, who were integral to the formation of the NHS. Their portraits will be accompanied by texts to contextualise their experiences.

“Thank you so much to everyone who attended the launch of #HereToStay70. London was an ideal setting for this event: many tourists as well as locals passed through so the project which began in Birmingham will now have international impact.

“Thank you to Sports Banger for sponsoring the #HereToStay London launch.”

•Read more about it:
One in ten are leaving nursing
Brexit: nurses vote with their feet