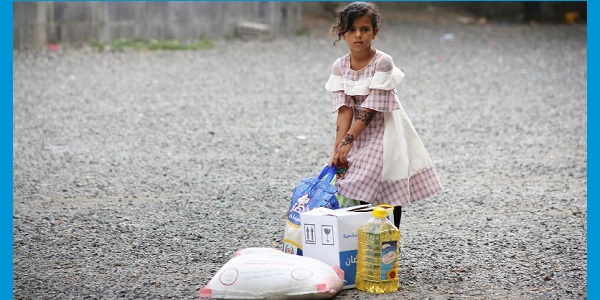 THE CONFICT IN Yemen has now entered its sixth year. It’s not as if it was a rich country to begin with: Islamic Relief began working in Yemen as long ago as 1998. They are still a lifeline for many families.

There is one table that Yemen tops: it has the largest number of people who rely on humanitarian aid of all countries in the world. Over 24 million people depend upon this aid: that is equivalent to one third of the population of the entire UK, or three and a half Londons.

The most pressing need is for food, but millions also need medical treatment in a country which, practically speaking, no longer has a healthcare system. Islamic Relief helps with both needs. One of its specialisms is to provide food and medical support to young children who are suffering from malnutrition.

Did we say the most pressing need is for food? A competing need is that for water: to drink and to provide basic sanitation. Islamic Relief believes that its work on the ground in Yemen has help restore or create reliable sources of water for over 800,000 people. And in the last year the struggle of providing for these basic needs has been made all the harder by the need to help those who have contracted COVID-19 and to stop it spreading.

The departure of Donald Trump from the White House in the USA has raised hope that a renewed attempt at finding a political solution to the conflict may be worth exploring. Islamic Relief has produced a new report, Islamic Relief in Yemen, which details its work in providing aid to the Yemeni people. We can only hope that it serces as a reminder to the politicians of the extent of human suffering – and the need to act quickly to free the people from the consequences of this relentless war.

●Read more about it:
STWC calls on the world to stop the war in Yemen
Islamic Relief moves relief up a gear in Yemen

2021-04-05
admin1
Previous: Man missing from home in Canning Town
Next: It’s life for the teens who murdered Newham man