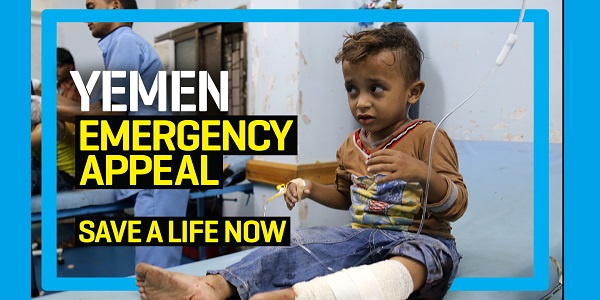 Islamic Relief moves relief up a gear in Yemen

AS MILLIONS OF Muslims around the world celebrated Eid, violence was escalating in the strife-torn country of Yemen – and the Islamic Relief charity was stepping up its relief operations to meet the humanitarian consequences.

Fighting intensified around the port of Hodeida, which had been acting as a bridgehead, bringing supplies in to some 20 million people. It is not only those in Hodeida who need food, clean water and sanitation and medical supplies, but also those further down the supply route.

Islamic Relief has been working in Yemen since 1998. As well as providing basic aid – food, water and sanitation, health care – the charity has worked on orphan and child welfare and vocational training for young people across Yemen, including many hard to reach areas.

Co-ordinating Islamic Relief’s emergency relief efforts on the ground in Hodeida is Salem Jaffer Baobaid, who is extremely concerned over hw the NGOs providing aid in this part of Yemen will cope with local need. He said, “I could hear an extraordinary number of jets flying overhead. People want to leave the city, but can’t. The conflict has affected the whole country and people will not move around. They are poor people, who don’t have houses elsewhere. They are vulnerable. They are inside their houses, waiting for their destiny.”

Imran Madden, Director of Islamic Relief UK, said, “Recent reports of escalating military activity around the port of Hodeida are deeply disturbing. The port provides a major lifeline to millions of Yemenis in desperate need of humanitarian aid. Any escalation in violence will put the lives of 250,000 people at immediate risk and will lead to devastating humanitarian consequences for millions more. We have to remember that this is already the world’s biggest humanitarian crisis. If it gets worse, the consequences will be devastating.

“There is still time to prevent this catastrophe from deteriorating further. Ultimately, governments should be working to end this horrific conflict which has caused the deaths of tens of thousands of people, and devastated the lives of millions more. As a permanent member of the UN Security Council, the UK has a unique position and responsibility to lead political efforts to end this crisis. We demand that the Foreign Secretary, Boris Johnson, does everything in his power to push for a permanent and immediate ceasefire to avoid any further loss of life and a catastrophic situation for a population already on its knees.”

Head of the Middle East Region for Islamic Relief, Dr Ahmed Nasr said, “This is an attack that has been launched during the last ten days of Ramadan which are amongst the holiest days of year for Muslims around the world, who are fasting. Thousands of people around Hodeida and millions across Yemen will be attempting to celebrate Eid, despite knowing that there is no end in sight for this conflict. Hostilities on all sides must stop. The international community needs to put pressure in the strongest of terms to de-escalate the conflict.”