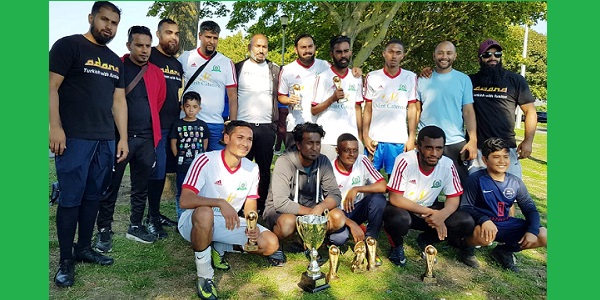 Football curry kings battle it out for charity

A CATERERS FOOTBALL TOURNAMENT at Newham Leisure proved to be a huge hit as 12 teams locked horns for on field supremacy.

The football festival was organised by Team Rohingya, in partnership with Human Aid UK and the Inner London Football League. A tight final saw Moguls takeaway from Roman Road, Bow, beat Shah’s from Warwick 2-1, with Selim and man of the match Mo the match winners.

After thanking the tournament sponsors, Riverside Spice restaurant from Colchester and Mojlish takeaway from Chelmsford, tournament co-ordinator Abdul Hussain said, “So many of us combined for a great cause to answer the call of the indigent and neglected. We want the Rohingya and all the needy to know that we are here for them.”

Aminur Rahman from Human Aid UK added, “It’s been a nice day out. We’ve played a bit of football and raised lots of much needed funds for the stricken Rohingya people. Me and the Human Aid delegation hope to deliver this aid to the needy when we visit Bangladesh in December.

“We organise tournaments throughout the year and the success of what we do is as a result of the players, supporters and sponsors coming together. We thank everybody from the bottom of our heart.”

•Read more about it:
Docklands FC crowned Rohingya football tournament champs
Bromley by Bow win back to back Premiership titles