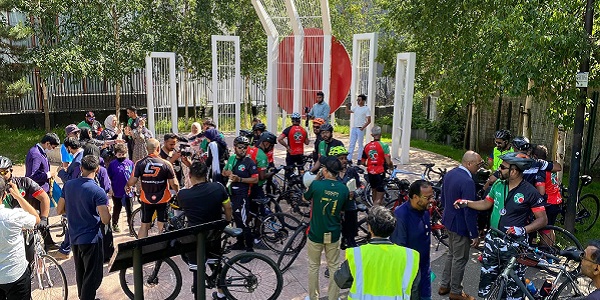 A GROUP OF cyclists have completed “Freedom 50” – a historic cycle ride 50 years of Bangladesh’s independence.  It is a national initiative which has seen individuals and organisations coming together to form a collective to celebrate this milestone anniversary.

Speaking after the cyclists arrived at Altab Ali Park in Whitechapel, Muzahid Khan, newly appointed Deputy Lieutenant for Greater Manchester, commented, “It’s been a roller coaster and emotional experience with friends, family and strangers coming together under one banner for a common purpose. Congratulations to everyone – the hard work has paid off!”

Tower Hamlets First Citizen and Speaker Ahbab Hossain was the chief guest and, accompanied by Whitechapel Councillor Faruque Mahfuz Ahmed, welcomed the riders to the borough.

Councillor Abdal Ullah, joint convenor with Ayesha Qureshi MBE of the British Bangladeshi Power & Inspiration publication, added, “I am thrilled that such a momentous event has been completed without any hitches. This is a testament to the team, volunteers and the cyclists for all their wonderful work. We have raised awareness of the importance issue of climate change and how it affects Bangladesh as a country. With the generosity of the community, £30,000 has been raised for street children projects – a phenomenal achievement.”