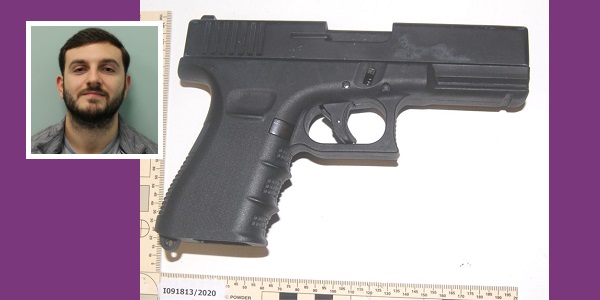 Andreas Antoniades and the gun which he was helping to sell

A MAN WHO lives on the Isle of Dogs has been sentenced to five years and three months in prison for his part in the supply of a gun and ammunition. Police continue to seek Danielle Forde, 31, of Manchester M8 in connection with the offence.

The local man is Andreas Antoniades, 29, of Marsh Wall, E14, who pleaded guilty to a charge of conspiracy to acquire a firearm and conspiracy to acquire ammunition.  The sentencing was decided at a hearing in Wood Green Crown Court earlier this month and came just days after a gun was brandished in a restaurant near where Antoniades lived.  It is not thought that the two incidents were connected.

Two men who appeared in court alongside Antoniades had pleaded guilty to charges of selling or transferring a firearm and ammunition, money laundering, and possession of cannabis and received the same sentence.  They were:
Stephen Panagi, 57, of no fixed address;
Daniel Sharpe, 45, of Beckton Gardens, Manchester M22.

The charges arose out of an incident last November, when police officers observed Forde and Sharpe, who were in a BMW, park in Gerrards Close, N14, near a Toyota Prius which was being driven by Panagi. Police believe that a bag containing a gun and some ammunition was transferred from the BMW to the Toyota during the minute or so that the vehicles were together.

A police investigation initially found no trace of telephone communication between the two cars.  However, both had been in telephone contact with Antoniades – who had arranged the transaction.

Detective Inspector Glenn Butler, from the Metropolitan Police Specialist Crime Command, said, “This is an excellent example of teams working together in the Met to remove a dangerous weapon and criminal property off the capital’s streets. Each of the 22 bullets seized could have gone on to cause serious injury, or even death, if we had not seized them. Firearms have no place in London and we are committed to robustly targeting both those who carry them and those who supply them.

“Whilst we are happy with the result, our work on this investigation will not stop until we arrest Danielle Ford and put her before the Court for sentencing. Anyone who has knowledge of her whereabouts should call the police straight away on 999.”

●Read more about it:
Three Newham men jailed for rape and robbery in Hackney
It’s life for the teens who murdered Newham man