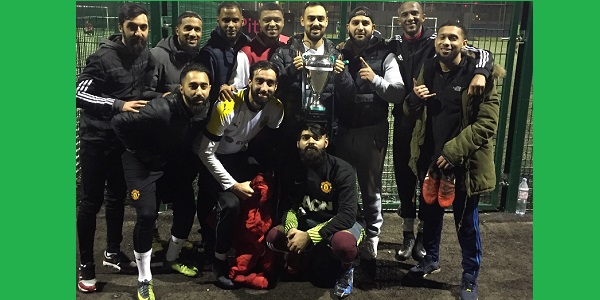 GANTS HILL WON the Premier Division on the last day of Season 3 on goal difference in another pulsating end to a Champions League season.

Mus scored seven goals as the new champions thrashed their title rivals JIFA FC to record a surprise 9-2 win in an intense game – with JIFA’s resolve finally being broken as they surrendered the title to a clinical and organised Gants Hill team.

As has been the case in each of the past two seasons, the battle for The Champions League’s Premier Division title went right down to the wire on the final day of the season with only one point separating three teams: JIFA FC, Gants Hill FC and Mile End FC!

The scenario was set. If JIFA won the game they would win the league. If Gants Hill won the game, they would have to rely on the Mile End FC result against Ilford FC. If Mile End won their game as well, then goal difference would decide the title.

Mile End did what they needed to do and recorded a 5-0 win over Ilford FC. Gants Hill now knew that they had to win by a clear four goals to snatch the title from Mile End and JIFA.

As expected, the encounter was a David and Golliath style battle from start to end. The tension in both camps could have been cut with a knife as both teams prepared to go out and do what was necessary.

The game started in a typical high tempo fashion with neither team giving away much and both teams pressing forward and asking questions of each other. As the clock ticked on, Gants Hill found their rhythm and pegged JIFA FC back.

However, JIFA soaked up the pressure and Gants Hill players knew that JIFA’s goal machine Akram would always pose a threat to their defence.

Gants Hill drew first blood through Mus, who smashed home and then scored again with a quick fire second. It looked like Gants Hill were doing what was asked of them and would score the required number of goals. The game then swung from end to end as JIFA scored – leaving it poised at 2-1. As Gants Hill scored another goal to regain their two goal advantage, JIFA hit back to make it 3-2, through Akram.

The first half ended 4-2 to Gants Hill and with the bit between their teeth, they came out gunning in the second half. JIFA held out on the wave of attacks from Gants Hill time and time again, but eventually the pressure told, and with Mus in the kind of scoring form that any striker could usually only dream of, he scored seven goals, with the impressive Haider chipping in with a couple to win the game 9-2 and deliver the League!

Jubilant scenes followed as the final whistle blew, with a pitch invasion to celebrate Gants Hill becoming the Premier Division Champions in their debut season in The Champions League.

While it was commiserations to JIFA and Mile End for taking the league to the final day of the season, congratulations were in order for the Gants Hill team for their impressive performances all season.

Gants Hill Manager Atif Shabir commented, “We have played in many leagues but I have never experienced a league concludimg on the final day of the season. To have three teams battling it out on the final day shows the quality of teams in this league. We’re delighted to have won it when it looked like it was out of our hands with Mile End winning 5-0. We can’t wait till next week to see if we can win the cup final and complete the league and cup double.”

League organisers Shaz Rahman and Habs Rahman said: ‘What a fantastic end to another great season! Once again, the season was decided on the final day on difference. Gants Hill knew the task at hand and came with a game plan that worked. JIFA have won the title in each of the last two seasons and Mile End were top all season only for it to be snatched away from them towards the end of the season.”

Gants Hill and Mile End will play the final of The Champions League Cup at Newham Leisure Centre on 6th February at 9pm, with Gants Hill looking to do the double and Mile End looking to get one over on their rivals.