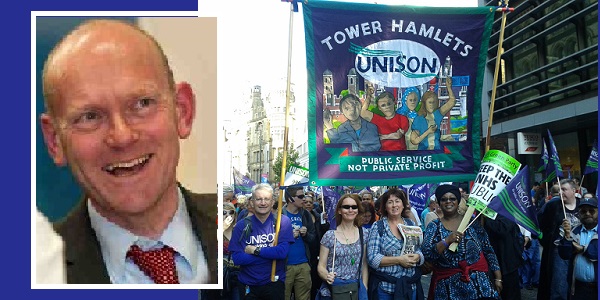 JOHN BIGGS is to sack the entire Council workforce on Monday, 6th July in order to impose new terms and conditions at work upon them. Biggs was elected on a Labour Party manifesto – and trade unions are now wondering if he is the new “unacceptable face” of Keir Starmer’s Labour Party.

The whole debacle is reminiscent of Neil Kinnock’s infamous speech to the Labour Party Conference in Bournemouth in 1985. Kinnock was trying to distance the Party from the Miners’ Strike and from Labour Councils which were resisting Margaret Thatcher’s attempts to cut their budgets and impose more political control from Westminster over local affairs.

Kinnock’s speech built up to an attack on Liverpool Council, which was in the forefront of the Councils’ campaign. There was a stand off between the Council, which was insisting that it would spend what was necessary to meet local need and that the Government should fund that spending, and the Government, which wanted to quash local resistance to its cuts-and-control strategy.

The Council found itself having to issue formal redundancy notices to the workforce, on a technicality to protect their position if the Government took over the Council. Kinnock took Thatcher’s side – and laid into the Council in a speech which included this famous statement:

“You start with far-fetched resolutions. They are then pickled into a rigid dogma, a code, and you go through the years sticking to that, out-dated, mis-placed irrelevant to the real needs, and you end in the grotesque chaos of a Labour council – a Labour council – hiring taxis to scuttle round a city handing out redundancy notices to its own workers.” [our emphasis]

At the time, Kinnock was preparing the ground for what was to become New Labour under Tony Blair – and his speech was seen as confirmation that Labour was abandoning its traditional principles in favour of a Tory-lite second home for those seeking a career in politics. It is strange to think that Biggs, who usually sticks to New Labour principles is now taking a course of action which the right wing Kinnock once so roundly denounced – but Biggs is role-playing Thatcher, not Nellist.

“Far-fetched resolution”
Biggs began with a far fetched resolve. Initially he claimed that changing the terms and conditions was management’s idea, and nothing to do with him. This was never a plausible scenario, as the Executive Mayor should be setting the strategy for the Council, not a Chief Executive – not even one with years of experience in the Tory suburbs.

Biggs could or would never explain just why it was positive or even necessary to change terms and conditions that had been in place for years in most Councils in the country. In the early stages, it seemed that management mainly wanted to cut the staff redundancy packages to the bone. It seemed that Biggs might be preparing to sack the workers in order to privatise most of the Council services – and this was a way to reduce the cost.  Whatever the reason, the “far fetched resolve” test has been met.

“Rigid dogma”
Biggs has shown little flexibility. Some proposals  have been amended or dropped in the negotiations, which have taken over a year – many because they were strange proposals that didn’t stand up to scrutiny.  The negotiations were also prolonged because management appeared not to realise that the Council technically employs school support staff in the Borough and didn’t involve the NEU, the teaching union – which had to take the Council to the High Court at one point to clarify what was going on.  Through the process, Biggs has been unmoveable: the changes will happen, though there seems to be no obvious reason to break all the national and local agreements that were in place and embark on this pointless excursion.  The “rigid dogma” test has been met.

“Out-dated, mis-placed, irrelevant to the real needs”
When Councils across the country were trying to grapple with Tory austerity measures and were then faced with dealing with the Coronavirus crisis, would you expect a Labour leadership to be prioritising sitting indoors, shuffling paperwork and trying to behave like an 18th century factory owner? It seems that Executive Mayor John Biggs is content for this exercise to consume huge amounts of management time. The “out-dated and irrelevant to real needs” test has been met.

“Hiring taxis to scuttle round a city handing out redundancy notices to its own workers”
Times have changed.  John Biggs probably won’t have to hire taxis to deliver staff their notice of termination of contract.  The notices can probably go out by email.  But the message is just the same: “thank you for working hard throughout the last ten years of austerity; thank you for your efforts on the front line over the last three months – you are heroes.  And you’re sacked.”

All this comes from an Executive Mayor happy to carry out cosmetic actions to support Black Lives Matter, such as reviewing local statues – but who won’t carry out a meaningful Equalities Impact Assessment on his proposals to cut the remuneration packages of the lowest paid staff.

When he stood for election, John Biggs said that he wanted to unite the borough after what he saw as the divisiveness of Lutfur Rahman’s Administration. He has certainly managed to do something Lutfur Rahman never managed: he has indeed united the Borough – against him. Are Labour Councillors content with this achievement? (You may want to ask them – see their contact details here).

Is the Labour Party proud of this move – a move so detrimental to Council workers that Dave Prentis, General Secretary of Unison, has had to step in and support, publicly, the fight to stop the package?  It is also a move which has brought the Council workforce to announce three days of strike action in early July – the first Council-wide strike against the Council in living memory.

Can we expect the new Labour Leader Keir Starmer to denounce John Biggs’s actions as stridently as Neil Kinnock once denounced the attempts of Liverpool Council to meet local need? It seems unlikely – and that is what the trade unions must fear. If the Labour leadership doesn’t come out and condemn what Biggs is doing in Tower Hamlets, we may discover that Biggs is just a trailblazer for a new national Labour policy of making public sector workers pay for the recession that is upon us.