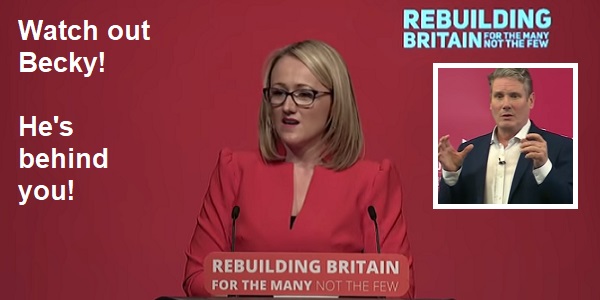 KEIR STARMER has taken his first step towards silencing dissent in the Labour Party – by sacking Rebecca Long Bailey from the Shadow Cabinet.

During the leadership election, Starmer said that he wanted to unite the Labour Party. Old cynics remarked that he could achieve unity very quickly if he silenced opposition – and it seems that he is doing just that.

Rebecca Long Bailey had tweeted a link to an interview with Maxine Peake which concentrated on Black Lives Matter and surrounding issues. In one part, Ms Peake claimed that US police learned tactics such as kneeling on a captive’s neck at “seminars with Israeli secret services”.  Perhaps Ms Peake had seen some of the photos currently circulating on social media in which Israeli state police pin down and kneel on those they are arresting – in a brutal fashion.  We do not know.

Mr Starmer claimed that this re-tweet of someone else’s comment “contained an anti-Semitic conspiracy theory” and sacked Ms Long Bailey, who had been Shadow Education Secretary.

Ms Long Bailey stood in the leadership contest which Mr Starmer won. Ironically, she was one of the first leadership candidates to sign up to the “ten pledges to end the antisemitism crisis” which the Board of Deputies of British Jews put to all the candidates. None of the pledges demanded that candidates should not re-tween statements about where US police learned their tactics.

The sacking comes after Ms Long Bailey went out of her way to support the NEU, the education trade union, on the question of putting safety first when it came to schools re-opening.  Mr Starmer had not openly supported the union and preferred to respond with a mixture of vacuous comment and wishful thinking when the topic came up.

Appointments to the Shadow Cabinet are in the Leader’s gift and sackings are not covered by the Labour Party’s disciplinary process, so there is no requirement for independent scrutiny of Starmer’s decision.

●Read more about it:
Starmer: total twerp on Corona exit
Starmer wins: it’s back to Blairism