Don't Miss
Home / Featured / Is this a reshuffle or is the house of cards collapsing? 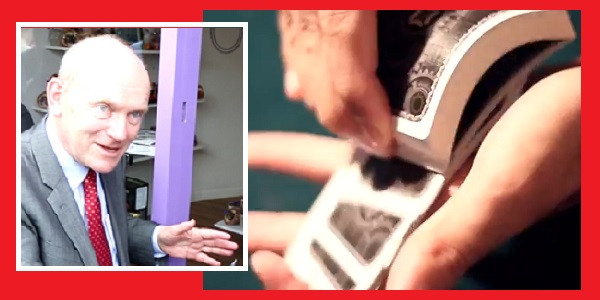 TWO WEEKS AFTER losing the Weavers by-election, Tower Hamlets Executive Mayor John Biggs has announced that he is changing his policy on “liveable streets” and having a Cabinet reshuffle.

Who’s up and who’s down?
UP goes Cllr Kahar Chowdhury (Lansbury) – but he has drawn a rather short straw. He’s taking on the Highways & Public Realm brief just as the outcry against “liveable streets” echoes round the borough. Will this modest councillor and first-time Cabinet member have the gravitas to make John Biggs listen to him on the burning issue of the day?

UP goes Cllr Asma Islam (Mile End). She is now Cabinet Member for Planning & Environment – up from having to do a job share with Cllr Eve McQuillan (Bethnal Green), who is DOWN (and out of the Cabinet altogether).

DOWN is Cllr Dan Tomlinson (Bromley North), who leaves the Cabinet, where he had previously had a part-time role with the Environment & Public Realm portfolio.

Also UP is Cllr Kevin Brady (St Peter’s), who is currently Chief Whip of the Labour Group and looks to be staying in post. Cllr Brady is being put forward to take over the Chair of the Strategic Development Committee, previously held by the late Cllr John Pierce. Residents will have to decide how they feel about the future shape of the borough being in his hands.

In the Cabinet of eleven, there are six women and seven BAME councillors – a majority in both cases.

There’s a new Deputy in (the) Town (Hall)
Executive Mayor John Biggs will be remembered for adding two Deputy Mayors to the Cabinet – bringing the total of deputies up to three. One of the three is identified as the “statutory” Deputy Mayor, while the other two are informal titles (which still attract a Special Allowance). Having a base of four allows the Mayor greater leeway on the equalities issue: he can have a male Statutory Deputy Mayor without being accused of having an all-male leadership, because he can balance out the men at the top by giving two additional women the informal titles.

Cllr Siraj Islam (Bethnal Green) has been a loyal Statutory Deputy Mayor since John Biggs first become Executive Mayor.  Now, as the May 2022 election heaves into sight, he has been demoted – though he still holds the Cabinet “Community Safety” brief. This seems little reward for six years of slavish loyalty to the Executive Mayor.

Cllr Asma Begum (Bow West) moves up from Deputy Mayor to Statutory Deputy Mayor, retaining her Cabinet portfolio of Children, Youth Services, Education and Equalities. This may be the biggest workload on the Cabinet – but there are no reports that she has asked the Executive Mayor for a Council broom for time-honoured proverbial purposes.

Cllr Motin Uz-Zaman (Stepney Green) is keeping his Cabinet brief for “Work and Economic Growth” but has also been promoted to Deputy Mayor. Perhaps this is a performance-related promotion: if so, perhaps he could point us to the work he has created and where the economic growth is.

Cllr Rachel Blake was once thought to be the Councillor John Biggs would nominate as his successor. Now it seems that Cllr Blake is having to spend at least another four years lurking in Cabinet as Deputy Mayor, while also continuing with the Cabinet brief for Adults, Health & Wellbeing, in which she applied competence to at least some of the Council’s Covid work.

The “Gang of Four” in the leadership of the Labour Group is comprised of two men and two women and includes two BAME Councillors. We now wait to see whether this mixed leadership is a token nod to equalities, or whether the Deputy Mayors will establish their own public presence and policy input.

The major casualty of the reshuffle is former and long-term Statutory Deputy Mayor Cllr Sirajul Islam, who not only remained loyal to the Executive Mayor and his cuts agenda but also fronted a number of controversial housing issues, such as the Council’s reaction to Grenfell and keeping Tower Hamlets Homes as the managing agent of the Council’s remaining housing stock (despite the tiny response to the resident consultation). Perhaps there are issues we don’t know about, but dumping Cllr Islam at this stage seems a strange way to keep his loyalty.

The major beneficiary of the reshuffle is Cllr Asma Begum – but will her enormous portfolio weigh her down? Will her time be taken up in Mulberry Place, keeping officers in line; or will she be seen in public deputising for Executive Mayor John Biggs? Will she take responsibility for delivering some detailed and/or controversial policies, as Cllr Sirajul Islam did?

In short, it seems that very little will change. It is impossible to tell, from the outside what Executive Mayor John Biggs believes are the failings of those whom he has demoted – and he believes are the qualities of those whose jobs have expanded.  The only new blood in the Cabinet is Cllr Kahar Chowdhury, who may bring a touch of political diversity but has been given little time to help the Administration change course. Will this reshuffle be enough to save the Biggs Administration next May – or will the whole house of cards come tumbling down?

2021-08-28
admin1
Previous: Bishwanath gear up for Upazila Cup!
Next: Muslims and Jews unite to find hate-attacker