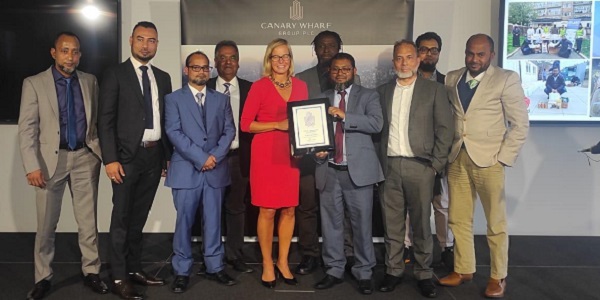 THE ISLAND NETWORK has been recognised for the community support work it has carried out on the Isle of Dogs during the Covid crisis over the last 18 months.

The recognition came from the Canary Wharf Group, who handed out certificates to various community groups from across Tower Hamlets who had been deemed to be “Covid Community Champions”. 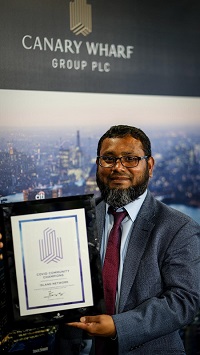 The Island Network was recognised for the quality of its work, but also for the sheer quantity of practical support delivered. The Network made over 56,000 deliveries of food parcels and hot meals – reaching out to the elderly, the young (via local schools) and others who were vulnerable.

Along with the practical support came a real spirit of friendliness. The Network brings together many Bangladeshi-led community groups, but it reached out to everyone in the community with concern and friendliness – giving an excellent guide to how to overcome division and  divisiveness in the community.

The award was accepted by Island Network Chair Maium Miah Talukdar, who said, “I would like to thank the Canary Wharf Group for recognising all the work that has gone on over these dreadful times. It was heart-warming to see the community pull together, even though what prompted us coming together was such a dreadful experience. The Island Network is no longer delivering food parcels and meals, but we still want to find ways of bringing the community together and supporting those in need.”