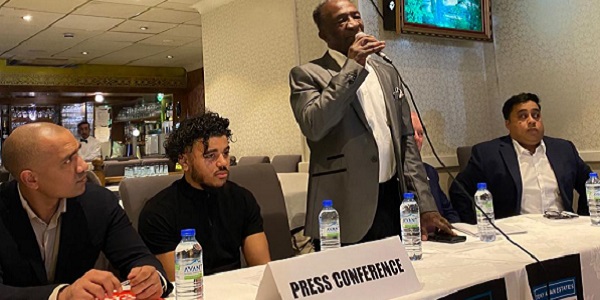 KHALID ALI: remember the name! This young East Ender has revealed his ambition to become World Welterweight Champion – and he has the support of the legend who is boxing manager Frank Warren.

Ali is entering the family business: his father boxed at the Repton Club, and Ali followed in his footsteps. As a youngster living in Tower Hamlets, Ali started boxing at Newham ABC – moving on to Repton when he was 15.

Wolid Ali, father of the 20 year old welterweight, said, “It is Khalid’s determination that singles him out. He is very focused. His family has supported him all the way, and so has the community. A professional career in sport is becoming a real option now for our young kids, and the British Bangladeshi parents are starting to see that. The audience numbers are rising exponentially.”

Echoing these sentiments, Ali explained, “I always knew this was what I wanted to do. When other kids were out playing, I was down at Repton Boxing Club in Bethnal Green learning how to fight. I want to inspire other young people in our communities that with regular practice you can achieve amazing things – just keep at it and the world will open for you.”

Ali has Bangladeshi, English and Nigerian heritage and easily settled in to the family of boxing, which has long been a diverse sport, where BAME youngsters have a chance to shine. Seeing his potential, British Bangladeshi businesses have rallied to sponsor the young boxer, so that he is able to train full time. Companies supporting Ali include Vantage Accident Management, Karaama, SK Properties, Tony Alan Estates and Stuart Cameras.

Khalid Ali’s journey to the top begins on Saturday, 11th September, where he will step out for his first professional fight under Frank Warren at the Copper Box Arena in Stratford.