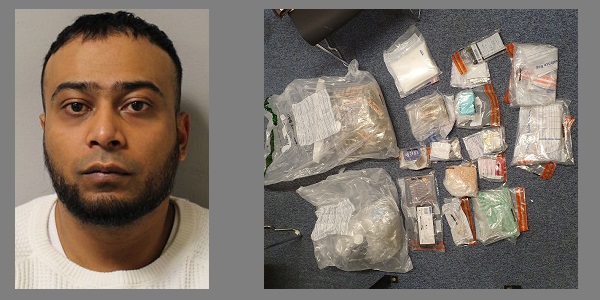 Shofiqul Hussain, left, and the drugs found in Loughton

IT IS A ten year jail sentence for a man whose initial wrongdoing was leaving the scene of an accident but who was later found to be in possession of a large amount of illegal drugs.

Shofiqul Hussain, 33, of Crescent Road, E13, committed the traffic offence on 30th June 2019. He was driving a rental BMW at speed along Wick Lane, Hackney. He drove through a red traffic light and then hit a curb and collided head-on with a private hire vehicle. Hussain got out of the car and ran away – leaving the driver of the cab and its three passengers critically injured. The accident happened nearly two years ago, but one of the victims has still not made a full recovery from their injuries.

Police officers who went to the scene of the accident could not find any sign of the driver of the BMW – Hussain – and the Serious Collision Investigation Unit launched an investigation to find him. The used CCTV, dash cam footage and forensic evidence from the scene. They made a public appeal for the driver to come forward, but he did not do so.

Eventually police identified Hussain as the driver: their next job was to find him. He was traced to an address in Loughton, where he was arrested. It was when he was arrested that officers found that he was in possession of illegal drugs. They searched the Loughton property and found drugs – including cocaine, heroin, MDMA and cannabis – with an estimated street value of over £200,000.

At a court hearing in February 2020, Hussain pleaded guilty to several counts of possession with intent to supply drugs and causing serious injury by dangerous driving. He was sentenced to ten years’ imprisonment at a hearing earlier this month at Snaresbrook Crown Court.

Detective Inspector José-Paulo Qureshi, who led the investigation, said, “Hussain fled leaving critically injured victims in his wake, avoiding arrest and continuing to supply illegal drugs. It was sheer luck this collision didn’t result in a fatality and I am very pleased with the sentence handed down and that a dangerous driver and drug supplier has been removed from our roads and communities and that a significant amount of drugs will now not be sold on the streets of London.”

2021-03-19
admin1
Previous: Drayton Manor Park operator fined after Evha Jannath death
Next: Where there’s a Will, there’s a way… Part 2