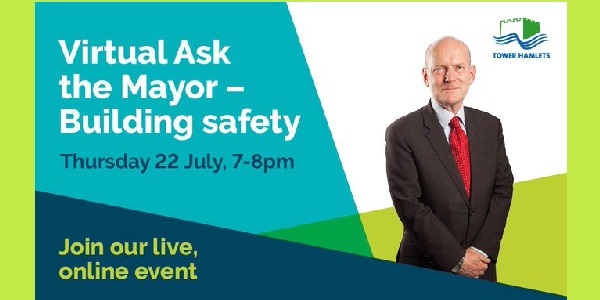 ARE YOU worried about the safety of your home? Tower Hamlets Executive Mayor John Biggs is holding a virtual meeting at 7pm on Thursday, 22nd July which will focus on this question.

The Executive Mayor has tweeted that he wants to answer your questions, as well as telling his audience about the work the Council is doing. The meeting comes just over four years after the Grenfell fire, and residents might have thought that the matter would have been sorted by now.

After Grenfell, the first focus was on cladding. However, as fire safety was checked more generally, other problems emerged, including standards of fire doors and fire exits, and whether residents knew the evacuation procedures. This was the case across the country, not just in Tower Hamlets.  There have been previous update meetings in Tower Hamlets: but why are there still questions to ask – and to answer?

There are several parts to the question of fire safety in Tower Hamlets.

●Council property
The Council owns just over 20,000 social homes, which are managed by Tower Hamlets Homes, an arms-length company.  Shortly after the Grenfell fire, a committee of officers and residents was set up to oversee fire safety work.  What happened to the committee?  Why are the works not complete?
•You can read more about the Tower Hamlets Homes approach to fire safety on their website, here:
THH Fire Safety

●Social housing
A range of social landlords of various sorts own and manage other social housing in Tower Hamlets (some of it former Council housing).  Although the Council does not have direct responsibility for these homes, they have responsibility for strategic housing matters in the borough, and it would be nice to know what they are doing about ensuring the other social landlords have safe properties.

●The private sector
Many tenants in Tower Hamlets live in former Council flats which were became privately owned under the “right to buy”.  The owners of those former Council flats, including flats now sold off to other social landlords, have a responsibility to keep their own tenants safe from the risk of fire – but also to the other tenants in the block. It is not clear whether the Council has any way of influencing landlords of private flats or private blocks.

●The cost
The cost of fire safety works is a big issue for leaseholders, who often feel that they were sold the flats without the lack of proper fire safety measures being clear.  The cost is also an issue for tenants, though – who see their rent money having to go on lengthy remedial works that should have been done years ago.

Tower Hamlets Executive Mayor John Biggs is going to deal with all of these issues between 7pm and 8pm tomorrow, Thursday, 22nd July.  To attend the Ask the Mayor event, you have to register on the “talk Tower Hamlets” page, which requires you to log in.  Some residents have found it hard to log in, but apparently the Council feels this system is more robust.

●Read more about it:
Council insists resident surveys ARE anonymous

2021-07-21
admin1
Previous: London Sportif launches All Stars
Next: London hosts the return of the ASICS 10K