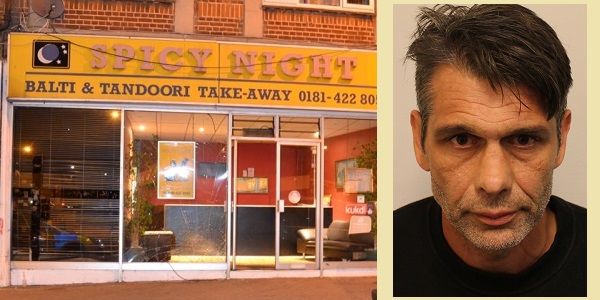 The shop which Zakrocki (right) drove into

MAREK ZAKROCKI told police “I’m going to kill a Muslim. I’m doing this for Britain” – before going on a mini rampage around Harrow. He shouted abuse and caused damage – too drunk to carry out his threat.

•Full story: Guilty for pledging to “kill a Muslim”


It’s a troubling case – difficult to work out whether justice has been done on several counts.

•The police initially treated the case as a terrorist incident. Once they had assessed the case, they classified it as a hate crime. Was that right?

•Zakrocki pleaded guilty to “assault by beating”. He had argued with his wife before going out and had grabbed her arm forcefully. For this he was sentenced to seven days in prison. Is that enough?

•Zakrocki went out saying he was going to attack a religious building, and he later said he intended to kill a Muslim. Zakrocki was driving a van. He was drunk, so he was guilty of drink driving. He drove his van into an Indian restaurant – as a result of which he was charged with dangerous driving.

Where did the “hate crime” go, then? There doesn’t seem to be any reflection of hate in the charges or the sentences.  Was the driving of the van into the restaurant just a “dangerous” act, or was it a deliberate attempt to attack and damage something associated with Muslims? In which case, why was the change just dangerous driving?

•When he was interviewed by police, Zakrocki said he was not racist and did not wish to harm anyone and he could not remember what he had done or what had happened after he had drunk two bottles of wine at the start of the evening.

The Judge seems to have taken these factors into account. He acknowledged that there was evidence that Zakrocki had racist views, but he believed that the crimes were the result of Zakrocki being drunk. Is this the right balance? Yes, Zakrocki was clearly drunk – but everything he did that night (except assaulting his wife) was targeted at black or Asian people or property.

He carried a knife and a torch baton: is that not evidence that it could have been worse? If he hadn’t gone out with the stated intention of killing a Muslim, would be have committed the drunk and dangerous driving offences? It came out in court that Zakrocki had made donations to Britain First in the past and that there was Britain First literature in his home.

•Zakrocki was sentenced to 33 weeks in jail in total, and he was disqualified from driving for three years. However, because he had been in prison, awaiting trial, since being arrested for the crime, which happened on 23rd June he was released immediately after the trial.

Is this fair? Let us know what you think – comment below.

2018-01-13
admin1
Previous: Where are London’s danger spots?
Next: Amputations after Redbridge flyover hit and run