Don't Miss
Home / Featured / Labour: this was no walk in the park 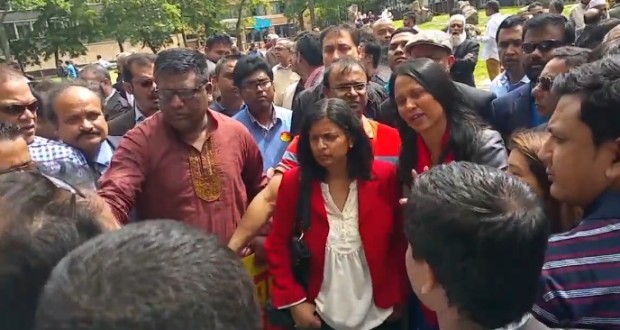 Labour: this was no walk in the park

The last weekend of the mayoral election campaign in Tower Hamlets saw questions being raised about how the Labour Party came to use a public park for a “campaign event”. Either the Party had hired Altab Ali Park (which would appear to be in contravention of Council policy on park hire) or it had just used the Park for campaign purposes without permission. The situation may become clearer during the final week.

However, the confusion over the venue has now been compounded by video footage which has emerged of the Saturday goings on – which make it less than clear what the event was.

Saturday morning was to see three women MPs of Bangladeshi origin canvassing together in Tower Hamlets: local MP Rushanara Ali, Rupa Haque MP – and Tulip Siddiq, who is not only a newly elected Labour MP but also the niece of Sheikh Hasina, Prime Minister of Bangladesh. Ms Siddiq attracted controversy before the General Election when it was revealed that she had visited her aunt while Ms Hasina was on a formal visit to Russia and Vladimir Putin had joined the two at a private family event.

A number of MPs from outside the borough have come to Tower Hamlets to try to help John Biggs in his second attempt to become Mayor of Tower Hamlets, no visit has attracted the interest of this one. The recently released video footage, which appears to have been taken by a bystander and which has been posted on YouTube by “Love Tower Hamlets”, shows a sea of Bangladeshi men surging around and taking photographs. Eventually the crowd parts to reveal Rushanara Ali and a rather shaken and put out Tulip Siddiq: it seems that the crowd has been surging forward in an attempt to take photographs of them.

A caption suggests that John Biggs has gone off canvassing, without the assistance of the two MPs, and Rushanara Ali MP can be heard pleading with the crowd, asking them to stop shoving and pushing and to go off and canvass for John Biggs too – and to let the MPs pass safely away from the Park. The crowd murmurs agreement, but it stays put, still trying to take photos.

Most of the men in the crowd appear to be wearing Labour stickers or rosette. Eventually, the two MPs, now apparently accompanied by two Bangladeshi women make a determined effort to stride forward and get out of the Park. Some of the men begin to act as stewards, shooing the crowd out of the way as the MPs stride down the path.

A second part of the video seems to take place after the MPs have managed to get away. A small number of angry men are left milling in the Park. One is haranguing his fellow Labour members, stating that this is supposed to be a Labour campaign and the MPs were supposed to be helping – so why, then, have they gone away?

Although Labour activists appear to tweet their every action these days, Ms Siddiq did not tweet a word on her visit to Tower Hamlets on Saturday – save to re-tweet the official London tweet and a tweet from a local activist claiming there had been a group of women in the Park who supported John. Four women appear in the accompanying photograph, alongside the three MPs – whereas the video footage of later events there shows that tens of men were present too. Ms Siddiq went on to tweet about her other activities, in her own constituency, that day. The official London Labour tweet shows Rushanara Ali using a small PA system, raising questions again about the basis of the use of the park.

It’s a small piece of footage and there’s no official Labour Party press release to give an official account of events.  However, it does suggest that Saturday morning’s did not manage to “unite the East End” at all.

To view the video footage, go to:
https://www.youtube.com/watch?v=T-SCw-V3j4c&feature=youtu.be

2015-06-08
admin1
Previous: Taslima meets her goal
Next: Labour muddles up its Khan’s and Khan’ts