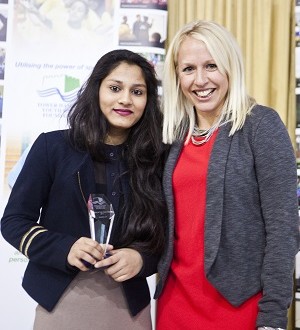 Bethnal Green Weightlifting Club, based in Turin Street, hosted a special weightlifting competition at the end of May which saw young Tower Hamlets resident Taslima Begum wrestle with some weighty issues.

Taslima, who studies at Oaklands School, has been trained and mentored by Tower Hamlets Youth Sport Foundation staff. The youngest lifter on the day, she was aiming to qualify for the British Juniors in the -48kg bodyweight category. To do this she would need to lift a total of 90kg (the sum of the best snatch and clean & jerk performed).

The first of Taslima’s three snatch attempts was of 40kg. With some strong nerves hanging over her, Taslima was able to nail the first lift. The next lift would be 45kg. Taslima pulled the weight nicely off the floor and quickly managed to get her body underneath. She locked the weight overhead, fighting to maintain her balance while trying to stand: this is the crucial moment for the success of a lift. Unfortunately she wasn’t able to keep hold of the bar and dropped it, earning a “no lift”. Sadly a similar situation happened in the third attempt also.

Clean and jerk was now upon us, and the first of three attempts was approaching. After calming some of those nerves, Taslima was in a better mind set. First up was 50kg, which was performed well and gave her a good start. Next on the bar would be 54kg. With a good mindset now, Taslima attained another good lift through pure determination. The last lift was 58kg, which would be a new personal best if she could lift it. Sadly this was not to be, and it was a struggle to get it off the floor.

Taslima had performed a best lift in each exercise of 40kg snatch and 54kg clean and jerk, which gave her a total of 94kg, 4kg over the qualifying total for the British Juniors. Although nerves may have got the better of her, she was still triumphant over having succeeded with her goal. Rich Kite, her coach and the Foundation’s Weightlifting Development Officer, was excited to see her performance in competitions develop and her confidence grow.