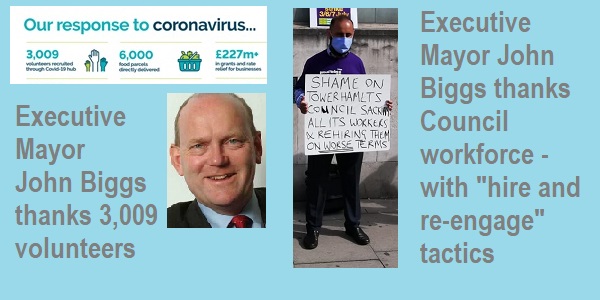 Mayor thanks volunteers – a year after shafting the workers

JULY BEGAN WITH a day out at the Art Pavilion in Mile End for Tower Hamlets Executive Mayor John Biggs. The visit was organised so that he could thank the volunteers who have kept it – and many other extra Council services – running during the Covid crisis.

The Art Pavilion replaced smaller vaccination centres spread out across the borough, encouraging people to travel further to obtain their treatment. For example, it takes 20 minutes to walk from the Isle of Dogs to Newby Place, one of the local centres, but two hours to walk to Mile End – a big difference for those who were shielding and avoiding public transport.

One of the unenviable jobs that the volunteers outside the Art Pavillion had was turning cars away, telling people they could drop off someone who was going for a vaccine, but if they had driven there to get their own vaccine, they could not use the Pavilion’s small car park. The volunteers inside the Pavilion had the difficult job of marshalling the crowds so that there was a good metre’s space between those waiting to be seen – that in a room with apparently no ventilation.

With all this on their plates, the volunteers deserved thanks for their work at the Pavilion and throughout the borough – and thanks were given by the Executive Mayor, who was taking part in a national “thank you” initiative.

The Executive Mayor said, “This Thank You Day, I want to celebrate our incredible volunteers in Tower Hamlets like the ones I met today at the Arts Pavilion who are helping people to get their vaccination jab. I’m very proud of the way our community has responded since the start of the pandemic and we’ve seen thousands of people give up their time to help out their community.”

The Executive Mayor made no comment about the thousands of people who work for the borough, on whom new contracts of employment were imposed almost exactly a year ago. Many of them are front line workers who worked flat out to help vulnerable members of the community, but no thanks came from the Executive Mayor to mark “Thank You Day” on 4th July. Nor was there any explanation of why Executive Mayor John Biggs chose to use “hire and re-engage” tactics to impose changes on Council workers – even though Labour Leader Keir Starmer has condemned these tactics when they have been used by other employers.

After members took a number of days of strike action last year, in protest against the new contracts and the imposition of them, Unison and the Council management tried to resolve the ongoing dispute with further talks.  These have now broken down – with the biggest stumbling block being the unfairness of the Council increasing the pay of the highest grades but not offering any increases to those on lower grades. Unison is also concerned that the Council is insisting on reducing severance/redundancy pay – to make the process of sacking workers more affordable, suggesting the Council is determined to sack more staff.

The volunteers who have helped the Council and volunteers who have just got on with it locally without any help from the Council (such as the Island Network, which has delivered over 50,000 food parcels or meals during the pandemic) all deserve their thanks from the Executive Mayor – and from all Tower Hamlets residents. But while the Executive Mayor congratulates his volunteers, Unison is once more having to ballot its members on taking further industrial action.